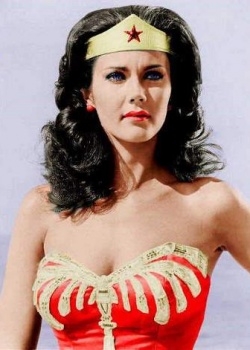 The Wonder Woman television show isn't going to be a reality anytime soon. ABC, CBS, Fox, and NBC were all given a go, and no one picked up the series based on David E. Kelley's pilot script. Could the script have just been lousy? I suppose so, although Kelley has certainly shown his television mettle penning hits such as L.A. Law, Doogie Howser, M.D., Chicago Hope, Ally McBeal, The Practice, Boston Public, and Boston Legal. No network found that Wonder Woman would work for its lineup, and what that says about society is lamentable.

To be fair, the networks all offered up understandable excuses. ABC's was the most obvious; the broadcast network is owned by the Disney-ABC Television Group, whose parent company Disney also owns Marvel comics. It's a little disappointing to see the comic publishing giant block DC's potential success here, but I suppose it's unreasonable to expect altruism from competing corporations. Fox was considered a poor fit for the program, CBS couldn't make up its mind, NBC was stalled in terms of funds, and the CW (which, being owned by Warner Bros., would have been a logical fit) couldn't afford it in the first place. These are all reasonable excuses, but I can't help but notice Marvel's Hulk is getting yet another television series, not to mention his third go-round in a feature film in a decade. The politics are different, of course, and the key players involved are totally unrelated. All the same, would he be subject to as much re-visitation if he were a woman?

Director Zack Snyder is no stranger to either superhero movies or female protagonists; his Superman reboot is in pre-production, and Sucker Punch is scheduled for release in March. In a recent interview with The L.A. Times, Snyder discussed the challenges facing the female action hero, saying female-driven films such as his upcoming Sucker Punch often have issues finding an audience. "We have female characters in this situation that's mostly the terrain of men," he told the Times, noting, "It's a challenge economically to find who is the audience for the movie."

Why is it so hard for audiences at large to accept female heroes? Are gender roles so entrenched that audiences can accept any manner of wildly fantastical heroism, but we really have to be sold on the idea of it stemming from a female hero? Lots of folks are excited about Sucker Punch. Unfortunately, I think more of this excitement stems from the novelty of kickass women than the intriguing nature of the plot. I'm guilty of this gendered excitement as well, but have also been pretty starved for a lack of female heroes for some time. I understand Wonder Woman is a casualty of poor timing to some extent, but the project would have had a better fighting chance in a more female-friendly environment. Sure, there have been financially successful female action heroes and superheroes in movies and film, but how many can you name? Probably most of them, and I'll bet it won't take you much time at all. Now try listing male heroes. You're going to run out of fingers and toes on which to count before long.

As it stands, Wonder Woman is the only one of DC's purported Big Three without a project in development; Snyder's Superman reboot is the second such remake since the turn of the century, and I wouldn't be surprised if the buzz surrounding Christopher Nolan's The Dark Knight Rises reaches a fever pitch even before the project begins filming. I'm likely repeating myself here, but it bears repeating: Wonder Woman isn't a viable franchise if no one knows what to do with her, and no one knows what to do with her because people don't know her well enough. You know how to fix that? Let people get to know her. She's in serious danger of becoming a token, and that's preventable.

Don't believe me? MovieBob, who must have been reading my mind, defies you to deny that there's an awesome movie there, just waiting to be made. Wonder Woman shouldn't be a financial risk, or someone we should have to convince audiences to care about. That audiences don't care, or that studios and networks think we don't, says something awfully depressing about gender relations in today's society, and the strides we haven't made.