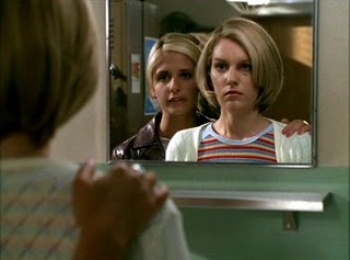 Every so often, purveyors of popular culture feel the weight of responsibility. They realize the mass consumption of their content provides a unique platform from which to take a stand, and take advantage of that soapbox. Marvel Comics did it earlier this week, with a free comic promoting suicide prevention services. Most frequently, though, the life advice comes from television. I've always known these as "after-school specials:" television programs that teach a valuable lesson within the established confines of their program. One program almost guaranteed to offer at least one Very Special Episode per year was Buffy the Vampire Slayer.

I loved this show, but it was the tropiest show since tropes came to Tropetown, and the after-school specials were plentiful. Here are three of my favorites, and an assessment of how well they addressed the episode's central concern.

"Beauty and the Beasts," Season 3, Episode 4

The horrors of abusive relationships are absolutely something to address, and "Beauty and the Beasts" did its best. New-as-of-this-episode characters Pete and Debbie look like your typical teenagers in love, sneaking all over school to make out, etc. In a revelation that I fervently hope is atypical, we find that Pete is controlling and abusive. Pete beats Debbie, she forgives him, she makes excuses for her bruises, he blames her for his anger and looks upon her every interaction as a betrayal. Debbie winds up dead at Pete's hands, despite her attempts to please and appease. The story is made all the more tragic for its disgusting foothold in reality.

The problem with Beauty and the Beasts is that Pete isn't your average teenager. His rage stems from his use of a steroid-like chemical. Pete himself is likened to a Bruce Banner or Dr. Jekyll, with his murderous jealousy standing in for his Hulk or Hyde. This is in keeping with the supernatural nature of things in Sunnydale, but does a bit of a disservice to the episode's standing as an after-school special. Often, situations like this will be handled in metaphor, in a way that is obvious but seldom misleading. Blaming Pete's issues partially on the chemical gives him a crutch, an excuse to wipe away the horrors of his abusive nature. Some of the manipulation and jealousy is attributed to his character, but the physical abuse is accompanied by a transformation of sorts, which removes the human face from the equation.

"Beauty and the Beasts" does an decent job addressing its central social issue, but weakens the message by introducing a supernatural element. Relationship abuse and battery is all too real, and can come from the most unexpected source. People don't have to look like monsters to be monstrous, and "Beauty and the Beasts" loses a few points for failing to explore this unfortunate reality.

Jim & Yahtzee's Rhymedown Spectacular: There Is Another Game Jim And Yahtzee 65 Comments
Comments on