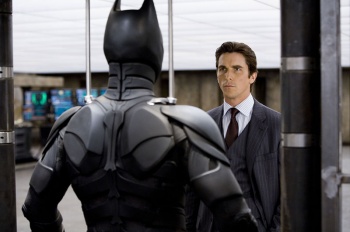 The fanchildren thought we had this one nailed. Joseph Gordon-Levitt as the Riddler, Rachel Weisz as Talia al Ghul, or Phillip Seymour Hoffman as the Penguin. Once Tom Hardy was announced as appearing in the film, we had him nailed as Clayface, Deadshot, Hugo Strange, or Killer Croc.

Well, fanboys and girls, we missed the bomb-rigged boat entirely. Anne Hathaway is our Selina Kyle, and Tom Hardy will be flexing his muscles as Bane. I'm going to add my voice to the growing chorus of skeptics, but I'm not worried about either actor delivering a fine performance in their announced role. No, I'm concerned about what the appearance of these villains will do to the film within Nolan's greater story arc.

"I seek ... the means to fight injustice. To turn fear against those who prey on the fearful."

2005's Batman Begins was a revelation. It broke Bruce Wayne down and rebuilt him in a plausible and accessible way, it eradicated all memories of Joel Schumacher's take on my beloved Batman, and it introduced the word "Nolanverse" to my vernacular. Film critic Roger Ebert said it best in his original review: "I said this is the Batman movie I've been waiting for; more correctly, this is the movie I did not realize I was waiting for."
One of the strengths of Batman Begins is its thematic focus, which spoke to fans of the character while admirably serving the story. This film is about fear and family. They inform one another even before Bruce Wayne's parents are gunned down, as Nolan kicks things off by showing his audience just why Bruce is afraid of bats. The film follows an angry young man as he seeks the strength and guidance to harness his fear and turn it against the unjust. Fear and father figures dance around one another throughout the film, ultimately personified in the Scarecrow and Ra's al Ghul.

The scope of Batman Begins was vast in more than one respect. Wayne's physical and emotional journeying structures the events of the film, and in making the film itself, Nolan tears down the existing franchise and rebuilds it from the ground up. The first time (of many) I saw this film in theatres, the audience was at a fever pitch, and I remember people actually jumped out of their seats and cheered when Batman flipped over that evidence bag:

Batman Begins laid a grand foundation for its successors, but left room for them to grow. The film's climax takes place in a city gripped by terror, but it can recover; Batman Begins ends with an older, stronger Bruce, but we know he has miles to go before he sleeps.

"This is what happens when an unstoppable force meets an immovable object."

Batman Begins could easily have been a film so good as to defy its sequel(s) to top its success. The Dark Knight did just that in 2008. The film was on over thirty critic's top ten lists for 2008, and named the best film of the year by a half-dozen critics and Premiere. Imagine the widespread surprise when the 2009 Academy Award nominations for best picture jumped right from The Curious Case of Benjamin Button to Frost/Nixon, with no The Dark Knight to be found. (The other three nominated films were Milk, The Reader, and Slumdog Millionaire.) The film's snub is widely regarded as the catalyst for the Academy of Motion Picture Arts and Sciences' decision to expand the Best Picture category from five nominees to ten.