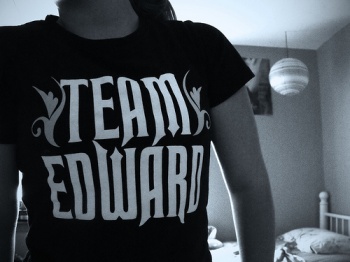 How was your weekend? I spent my Saturday and Sunday reading and researching Twilight for an upcoming project. To support a point, I needed to investigate fans of the novels, their thoughts and opinions. So I spent a couple hours browsing Twilight-centric forums.

It was a revelatory experience, one that made me reexamine what it means to be a "fan," one who appreciates something on some deeper level than the general populace. The recent cultural adoption of the term "fanboy" and "fangirl" has almost redefined what it means to identify as a fan, but to the discrediting of others. On the spectrum of fandom, there are the elitists, the obsessives, and the low-maintenance. Each fan approaches their chosen universe from one of these three viewpoints, and while popular opinion is that some fans are somehow better than others, popular opinion is dead wrong.

Fanboys and fangirls have been painted with a pretty unforgiving brush. They're seen as obsessive about detail, overprotective of their chosen oeuvre. The growing popularity of geek culture has inflated the elitism of being the most knowledgeable fan - every day, there's another opportunity to say, "I liked such-and-such before it was popular." In his Wired article "Wake Up, Geek Culture. Time to Die," Patton Oswalt states, "I'm not a nerd. I used to be one, back 30 years ago when nerd meant something." The implication in the statement is clear: Now that geek culture permeates so much of today's popular culture, it somehow means less.

The "I loved it before it was popular" attitude marks the most ardent of fans, and this is the populace most likely to be venomous in their own defense. Seeing an interest one has carefully cultivated being watered down for mainstream consumption and eagerly snapped up by an under-informed public can be quite frustrating. (Ask the 19-year-old me how she felt when The Phantom of the Opera hit movie theaters, and be prepared for a lot of profanity.) There are probably Who fans out there who couldn't abide my ignorance of the Doctor's adventures in his first eight personae, and Trekkies who would write me off for not knowing the technical details prerequisite to being considered a "real" fan.

I'll admit I'm still guilty of this elitist attitude myself at times. My lack of patience for misquotation, in particular, is one of my many failings as a human and a geek. I think we all need to take a little step back and reexamine our fervor, though, and see how this elitism serves us. It's all very well to want to know the most, to know it first, but what good it is without the love for the fandom in the first place?

Separate from the elitists are the obsessives, those convinced they cannot live without whatever pleasures they derive from their fandom of choice. While they may not have every detail memorized, these fans have the love covered. My recent experience with the Twilight forums gave me an at times graphic insight into the mind of the passion-driven fan.

To be fair, some sites I researched centered on serious discussions of the plot, characters, and themes of the series. Most, however, contained threads such as, "which Cullen bit you and where?" "Sweetest Moments aka I so wish I was Bella right now moments," "Do you think vampires have sex?," "what is your best qutation [sic] in twilight," and "WHAT WILL U DO IF U'VE GOT A MAIL FROM EDWARD CULLEN...?"