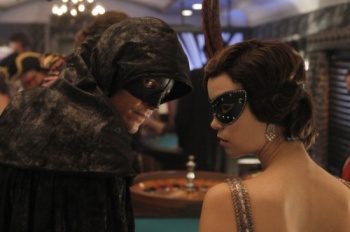 Okay, NBC. Relax. Now close your eyes and breathe, nice and slow. Good. Now repeat after me: "I do not need to cram so much into The Cape. I can take my time telling this story." And breathe in... and out. You may open your eyes. Thanks so much, NBC; I'll see you next week. Namaste.

Scales, our ol' east-end friend with the skin condition, is waiting at the docks. A car pulls up, and a gentleman in an ARK uniform hops out, prattling to himself about how much he loves Brazil nuts. Scales isn't fooled by this conviviality, and demands to know where Peter Fleming is. Fleming is getting a massage right now, oooh, and so sent Joe ARK to deal with the dockworkers. Looks like Scales and Fleming have gone into business together, as Joe is talking in a cheerfully threatening way about how ARK is expecting to be paid. Scales isn't down with the payment plan, and Joe Ark says, I kid you not, "I think you have me confused with someone who gives a flying frag." It's nice to know the producers of this show are really going for that bad-movie-edited-for-television feel. Scales appears just as upset by this rejoinder as I am. He's practically quivering with rage as he warns Joe ARK, "You just made a big mistake: You just made me remember you!"

One of Scales' henchmen is double-crossing him! He and The Cape meet to exchange what looks like a thumb drive for cash. The hench is worried, because Scales is "a menace, bro," ready to fly off the handle at the slightest provocation. He won't stop spying for The Cape, though, just notes that the "price is going up next time, bro." I don't think I got enough "bro"s in those seven seconds. Can I have a couple more?

Cut to Orwell and Vince in his hideout (which needs a name. Cape Cave? Fortress of Snappitude?). They're listening to Vince's new purchase: The conversation between Scales and Joe ARK at the docks, the one secretly recorded by our extra-crooked henchman. Vince is grumbling that Fleming "has lifted shamelessness to an art form," mumbles around about the dangers of their upcoming mission, saying how badly he needs Scales to out Fleming on this train, then finally exclaims, "I need to knock the pieces off the board!" He doesn't seem much more affectedly disgruntled than usual, but something must be up, as Orwell asks him what's wrong. Turns out it's Trip's birthday. Orwell takes this in stride, saying "birthdays are overrated," then tries to snap Vince out of his mope, asking, "Are we brooding or suiting up?" Oh, Orwell. Even sparkly vampires brood better than that; Vince is just having a hissy fit.

Vince enters Max's trailer unannounced, looking for some backup. He gets more information than he wanted, though, as Max, Rollo, and Ruvi the hypnotist are all huddled around plans like a smaller, more diverse Ocean's 11. Max tells Vince they won't be able to help him, as they have "Carnival business." Remember? They're the not-at-all conspicuous Carnival of Crime.

The Cape wrangles Scales down to the docks, and the villain is obviously irritated at being called in to work. Why? Well, The Cape "interrupted lasagna night. And I like lasagna." You can see the writers trying to think of something homey and relatable, something everyone likes. "Hey, Lasagna's perfect, especially because he says the "s" different! We can emphasize that he's foreign, yet relatable!" Then they give each other undeserved pats on the back.

The Cape has placed himself at the highest, most visible point, so as to give the greatest dramatic effect to what he's about to say: "Are you a pawn or a king, Raoul?" Scales isn't going to play. (I like him more already.) "I'm a dockworker, with low blood sugar." Even though no one's going along with his metaphor, The Cape refuses to let it drop. "Peter Fleming thinks you're a pawn. Or should I say Chess... thinks you're a pawn?" The Cape reveals that Chess and Fleming are one and the same, so in paying off both of them, Scales is paying the same dude twice. This is the art form of shamelessness Vince was bemoaning earlier. Yeah, this is just... just awful. How dare he?

"If I want financial advice, I'll ask my accountant. Not flower girls." I listened to this scene half a dozen times, hoping I'd misheard, that Scales said, "Die Fledermaus," or something that made some semblance of sense. Nothing. He calls Cape a flower girl. Is this supposed to bring to mind Eliza Doolittle, hawking violets in Covent Garden? Is this weird pseudo-insult just intended to remind us that Scales is British?