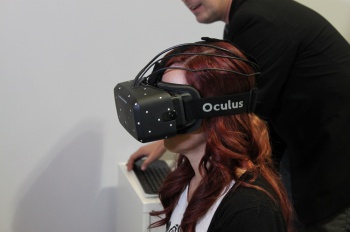 Oculus is at CES 2014 with the latest version of its Rift VR headset. Codenamed "Crystal Cove," there are a few new tricks this time around, and the hardware is closer than ever to retail ready.

Between the original, Kickstarter-funded developer kit and the HD prototype that made the rounds at CES and E3 in 2013, the chief complaints have been about motion sickness and image blur - some population of those who have tried the Rift so far have ended up wrapped around a toilet after their demo, and everyone, barf or no barf, can see the image blurring in the older headsets.

The motion blur is now effectively gone, thanks to a brand new 1080p AMOLED panel from an undisclosed manufacturer. Where the old panel had a 16 ms response time - good for LCD displays circa 2004 - the new prototype has a sub-1 ms response time. The demo games seen by Andrea and I were running with about 30-40 ms of latency, which is right between the old prototype (60 ms), and the retail target (20 ms).

It's not just the panel that eliminates the blur, but also how the image is sent to the screen. Where the old hardware would send all the information to the panel, this new model leaves small portions black, letting your eyes fill in the blank. It's (sort of) akin to how active-shutter creates that optical 3D illusion when you're in a movie theater.

So where the existing hardware has been upgraded across the board, there's some new tech in the kit as well. The Rift system now includes an infrared + RBG camera, which tracks your head movement in real time. This allows for new kinds of movement not seen in the older hardware - leaning in and out, side to side, and so on. In the Oculus Unreal Engine 4 Tower Defense demo, you can lean in, and immediately more detail can be seen on the models and in particle effects. It's like turning the zoom on a camera lens, in effect.

The EVE Valkyrie demo, which is being fleshed out into a full game by CCP, still takes the cake. This is an updated version of the EVE VR demo seen at E3 2013, and it's just as incredible now as it was this past summer. The complete lack of motion blur is the real kicker here - no more smearing while you're boosting around an asteroid to avoid rocket fire.


Between the improved tech, comfort, ease of use (calibrating the motion tracker takes one button click), and the fantastic demos, it's clear that Oculus is on the right path to retail. There's still no official release date for a consumer version, but if these period updates are any indication, it will be soon, and it will be glorious.
Related to:
devin connorsces2014hardwareoculus riftoculus vrscience and techtechvirtual reality
0
Tweet