It's easy to get wrapped up in all of the excitement of the Star Wars toys and playsets being introduced in Disney Infinity 3.0 and forget that the game isn't actually called "Star Wars Infinity 3.0." The game is still a celebration of all things Disney, from classic mascot characters like Mickey Mouse, Donald and Goofy; to Disney movies like Wreck-It-Ralph, Pirates of the Caribbean, and The Lone Ranger; to Disney subsidiaries such as Marvel and Pixar.

As such, in addition to the one Marvel and three Star Wars themed playsets planned for Disney Infinity 3.0, a playset for Pixar's latest film, Inside Out, will also be available later this fall.

Unlike the more action oriented Marvel and Star Wars playsets though, the Inside Out playset aims for a more broad appeal, opting instead to be a traditional 2D/3D platformer. And of course, as with all Disney Infinity playsets, the game can be played either solo or with a friend in co-op. 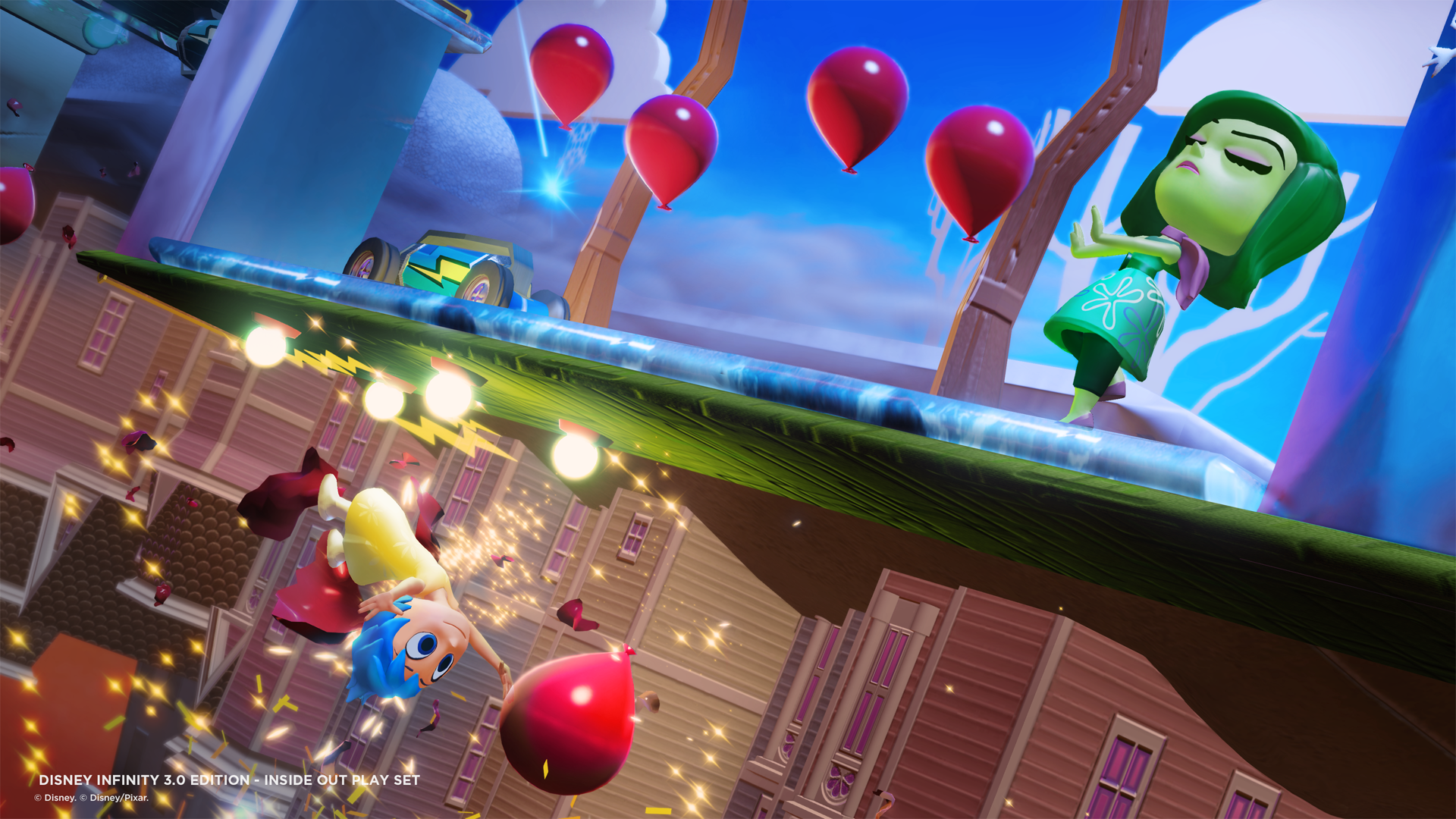 Interestingly enough, the game that immediately came to mind as I played through a short demo of the playset was Super Mario 3D World. Not only because of the mixing of both 2D and 3D styles of platforming levels, but also because of the slight differences between each character that allow them to traverse the levels in ways that others cannot.

Joy utilizes a Yoshi-esque flutter jump that allows her to float across otherwise impossible gaps; Fear can run faster than any of the other characters, allowing him to run across crumbling bridges before they collapse; Disgust repels herself off of clouds, allowing her to jump higher than any of the other emotions; Sadness is able to walk across clouds that would dissipate for any other emotion; and Anger, of course, is able to walk on lava.

In my short hands-on time with the game, I was able to play both an early 3D level and one of the later and much more difficult 2D levels that even had a couple of other journalists at the event struggling to beat it. The first level was pretty basic, dealing with simple platforming tasks and was filled with collectible balloons, with some placed in areas that required a specific character's trait in order to reach them.

The 2D level was quite interesting though and made me think of the fantastic indie platformer, Ibb and Obb. The level was designed around the mechanic of flipping gravity, and required players to carefully time jumps in between gaps that would inverse gravity when you fell through them, all while avoiding enemies that were jumping over the gaps on both sides of the gravity divide. It was all very mind bendy, quite challenging, and a lot of fun.

All of this platforming action is framed as a sequel story to the film. Riley, the 11-year-old girl with personified emotions that live inside her brain, falls asleep while watching a kiddie channel, but accidentally hits the remote to flip on a B-horror movie. This causes tons of bad things to flood into her subconscious, leaving it up to Joy, Sadness, Anger, Fear, and Disgust to fix up Imagination Land before Riley wakes up.

The playset comes with Joy and Anger included with the package, with Disgust, Fear, and Sadness being available for purchase separately.

Disney Infinity 3.0 launches this fall, with the starter set featuring the Anakin Skywalker and Ahsoka Tano figures, and the Twilight of the Republic playset, retailing for $64.99.