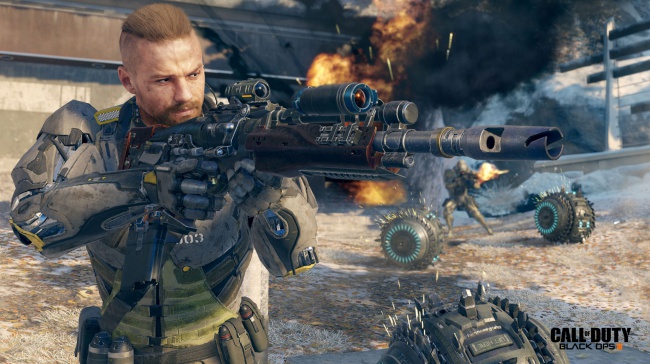 I had a chance to visit the Call of Duty: Black Ops III Pre-E3 event last night in LA, where Treyarch was showing off some of the innovations the team has made for this year's entry to the Call of Duty franchise. Treyarch may be known best for the Nazi Zombie mode which dates back to World at War (and there will be zombies in Black Ops III) but this time around, the newness comes primarily from the gameplay, rather than game modes.

A lot of this information is out there already, but they did show off two new Specialist characters, complete with ridiculously powerful special weapons and abilities. There was even some character story information, but you're probably here to find out how they excel on the battlefield, so I'll just get right to that.

Callsign: Prophet is an early adopter of cybernetic augmentation, so his special weapon and ability won't be too surprising. His weapon, the Tempest, is a lightning gun, which fires bolts of electricity at foes, which always seemed to be one-shot kills. When he's charged, his bolts are able to arc to nearby enemies, which is devastating to clusters. It's particularly hilarious to watch someone take down an enemy unit with the Tempest, only to have another enemy run around the corner, and immediately get zapped themselves.

Prophet's special ability is similarly intriguing, though will almost certainly take a lot more practice to use effectively. "Glitch" allows Prophet to flash back to a nearby previous location, which has some interesting applications. If you're rushing a room, and realize that you're outgunned, you can flash back to your pre-rush cover. Likewise, if you're being chased down, a well-timed Glitch will let you teleport behind your pursuers for an easy kill.

Callsign: Nomad is a survivalist, explaining his penchant for traps. His weapon is the H.I.V.E. pod trap, which you can scatter around an area you're defending to bolster your defenses. When an enemy triggers the trap, they're immediately swarmed by a cloud of nanobots that take them down on your behalf.

Nomad's special ability is "Rejack," which is an injectable medpack, that will instantly recover you from near death. When your opponent gets the drop on you, Rejack lets you regain the upperhand, with a surprise recovery and takedown.

At this point, you've likely seen some of the in-game action, but to recap the new maneuverability features, Treyarch decided to adopt some of Titanfall's mobility moves. You'll have a Thrust Jump, allowing you to cross larger gaps, or get to higher ledges. You can Wall Run, which can also be chained, so you can avoid being a stationary target in an alley, by hopping from wall to wall. There's also the Power Slide, which replaces the dive to prone move from previous Black Ops. Power Slide actually allows you to slide forward or backwards, depending on your input, so ducking into or out of a close combat situation just got easier. Water has also been introduced, allowing you to take cover in a pool or lake, and get all aquatic on nearby foes. The effectiveness of all of these mobility options is improved by the unlimited sprint feature, which means you'll never have to break from pursuit to catch your breath. The biggest thing with the new maneuverability, however, is likely that every one of these allows you to stay in the fight. You'll keep your weapon up while sliding, swimming, wall running, and so on. You can even aim down sights for more on-the-go precision.


The Gunsmith customization tools also looked incredible, even if it's not exactly something I'd buy into myself. Unlike previous gun skins, these custom builds allow you to change the components as well as the appearance. Each gun has two models and can hold up to five attachments, which gives a huge breadth of options. More than that, there's a custom paint shop, which lets you get into extreme detail while you're personalizing the appearance of your weapon. There are three paintable sides on each weapon, with 64 graphics layers per side, each of which has its own colors, transparency, and opacity options. These features seem tailored more to a graphic designer than a hardcore shooter player, but I have no doubt that even the basic design and customization options will be welcomed by long-time CoD fans.


Personally speaking, I'm most interested to see details about the Zombie mode as they are announced in the coming months, but this should certainly help keep you sated for the time being.

Call of Duty: Black Ops III is scheduled for a November release on Xbox One, PS4, and PC.