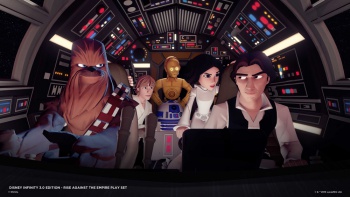 Here's the thing: I'm 32 years old. I have zero children. My husband is even older than I am. And we love Disney Infinity. It's one of very few games we play together cooperatively without wanting to kill each other. As a massive Disney fanatic married to a comics nerd, Disney Infinity gives us the best of both worlds. And with Star Wars, a franchise that is deeply meaningful to me, being added to the newest iteration, how can I resist?

Sure, it's got its shortcomings. The vehicles are wonky, the gameplay can be shallow, and the characters are limited to their own worlds. Disney Infinity 2.0, released last year, improved upon the base game while adding Marvel franchises The Avengers and Guardians of the Galaxy to the mix. Of course, to experience the improved gameplay, you had to buy a new base set and more figurines--and now, for the third time in three years, Disney is asking consumers to do it once more. Is it worth it? Short answer: I don't know yet.

My actual hands-on time with Disney Infinity 3.0 was short, so obviously I made a beeline for the new Star Wars content. After all, that's the big draw of the newest iteration, and with a new film hitting theaters later this year for the first time in over a decade, there's no denying the Force-like pull of that universe. In gameplay inspired by the Battle of Hoth, I hopped aboard a snowspeeder and set out to take down three AT-ATs.

It didn't go very smoothly. Remember that vehicular difficulty I mentioned? While it's definitely not as atrocious as in previous iterations, the snowspeeder controls were anything but intuitive. It took some constant explaining from the Disney rep demoing the game before I was able to make any progress, but I finally (and shakily) took to the skies--or rather, the air a few feet above the snowy fields of Hoth. Okay, AT-ATs, you're going down! At least, that's what I thought until my snowspeeder exploded and Luke Skywalker met an untimely end.

Okay, so Luke was down, but with an array of Star Wars characters within reach, that wasn't a problem. The Disney rep reached into the case and pulled out another NPC figure, this time opting for Princess Leia. After popping back into the game, which is a seamless transition, I took control of a speeder and tried again.

It took some finagling to take down an AT-AT with a wire like in The Empire Strikes Back, but once I figured it out, it was definitely satisfying. I had to repeat the process two more times to complete the mission, and each time it went a bit more smoothly. As I circled the AT-ATs, green arrows showed me which direction to move to keep from severing the rope. Sure, the game may have held my hand a bit too much, but it's a small price to pay to be part of a battle I've watched dozens of times on-screen.

The real treat of the session, however, was the booth itself. Amiibos from concept to final stages were on display, as well as larger versions of Chewbacca and Darth Vader. Artwork adorned the walls, showing how the characters we've loved for decades went from the familiar film versions to the stylized Disney Infinity iterations. A curtain of discs showed off even more art and characters. The entire Disney booth was dedicated to this game, and the appreciation for the source material was most certainly on display. Just gazing at it all made me grin--hey, it's Rapunzel! Look, it's Tron! Check out Yoda's concept art faces! When it comes to the game's art and attention to detail, there's nothing to complain about.

If you never got into Disney Infinity, I can't tell you that 3.0 will change your mind. All I know is, adding Star Wars to the mix only makes it better. It doesn't help that the NPC figures that accompany the game are expertly crafted, so they'll look as good sitting as a shelf as they will when you're playing. Without much hands-on time, it's hard to tell how Disney Infinity 3.0 will push the series forward, but I'm ready to see where it goes next.