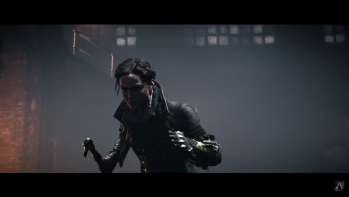 I'm not ready to give up on Assassin's Creed yet.

I have sort of a weird personal track record with Ubisoft's prolific series. I didn't jump in until seeing Assassin's Creed III at E3 a few years ago. I was so impressed that I went home and played Assassin's Creed II and Brotherhood back to back. I loved them, I was sold... and then ACIII didn't quite meet my expectations. But it was okay, because Assassin's Creed: Black Flag was excellent! And last year, I was in this exact spot writing a preview for AC Unity. A glowing preview, I might add--it was one of my favorite games of the show. The finished product? Not so impressive.

But I still have hope. I want to see this series return to greatness. Will Assassin's Creed Syndicate herald this comeback? It's way too soon to tell from the 20 minutes of hands-on time I got on the show floor. I do know that Syndicate is incorporating some new gameplay elements that work pretty seamlessly, which is refreshing.

Let's back up. Assassin's Creed Syndicate is set in Victorian London, an oft-used time period in gaming. For the first time, there are actually two playable protagonists, twins Jacob and Evie Frye. I wish I'd gotten to control Evie, not because I need to be playing a female character at all times, but because her character design evokes badassness while Jacob looked more like a generic bearded white dude. Alas, for the purposes of my demo, I stepped into Jacob's shoes and hit the town.

As I tracked and assassinated members of a rival guild, I made my way from street to rooftop and building to building using the new zipline mechanic. I definitely felt a bit like a Victorian Batman as I zipped around, but it's super useful to be able to get right to a higher vantage point when you're on the lookout or on the run. Similar to Splinter Cell: Conviction's "Last Known Position," you'll be able to see a silhouette of where gang members or Templars saw you last, making it easier to figure out how to evade them. Alternately, you can just murder them all, a mechanic I often use due to my complete lack of patience.

I'm notoriously terrible at Assassin's Creed's many, many chase sequences, usually due to often getting caught on random obstacles and losing my target. You know what makes these chase sequences more fun? Vehicles. With the press of a button you can hijack a horse and carriage, which can then be used to ram into foes, speed through alleyways full of destructible elements, and catch up to the target in a hurry. Yes, it's definitely a bit Grand Theft Assassin's Creed, but in short bursts these chases can be pretty fun. You can even hop from carriage to carriage if need be, which can make commutes pretty intense. If driving isn't your thing, you can remain on foot like Assassins of yore,

Being an alpha build, the demo wasn't without issues. Graphical glitches had Jacob clipping through walls and getting stuck in the environment, at one point requiring the sequence to be restarted. Based on previous experience, however, I'll take the E3 experience with a grain (or an entire shaker) of salt. For the most part, Syndicate ran fine, though visually it's clear that it's still very much a work in progress.

Assassin's Creed Syndicate shows promise. I'm not blown away in the same way I was when I first saw Black Flag, but I'm pleased. The demo was fun, and there are a lot of interesting new developments from the gameplay to the characters themselves. For now, I'm remaining optimistic but cautious. Ubisoft, please don't let me down when Syndicate comes out for PS4 and Xbox One later this year.