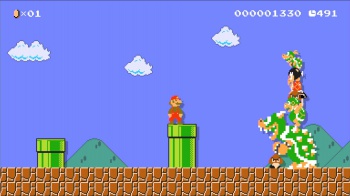 Super Mario Bros. was the first video game I ever played (cliché, I know). As such, the series has been with me for my entire gaming life. Despite some gamers' complaints of Nintendo's heavy focus on first-party series, I've never gotten tired of new Mario games. That said, I didn't go into Super Mario Maker expecting to like it as much as I did.

That it was one of the standouts on the show floor shows how much progress can be made in a year. This game has evolved so much since its initial announcement, particularly in how Super Mario Maker encourages the community to create and share with one another. Now I can see the charm, fun, and long-term potential of this build-your-own-Mario Bros. title. I can't wait to play more zany user-created stages, and I'm hoping to build a few clever levels of my own. 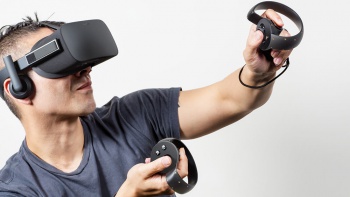 I can't get over how cool it was to use Oculus Touch for the first time. Even though it was a fairly basic tech demo, I loved the way the half-moon prototype controllers felt in my hands, how easy it was to interact with the environment in a natural way, and how quickly I forgot where I was and what I was actually doing. It was my very last hands-on of E3, and even though I was exhausted and overwhelmed by the events of the week, I was glad that there was still one last thing to make a big impression on me.

Of course, we can't talk about Oculus without talking about the VR headset itself. I wasn't sold on VR before last week, but I'm definitely coming around. Now I can see why gamers would prefer virtual reality to a standard TV-and-controller interface for certain experiences. I still want to know what was going on in Edge of Nowhere. Using the latest iteration of Oculus hardware with real games - particularly games as intriguing as Insomniac's first VR effort - took my perspective on Oculus Rift from a mild curiosity to a genuine interest.