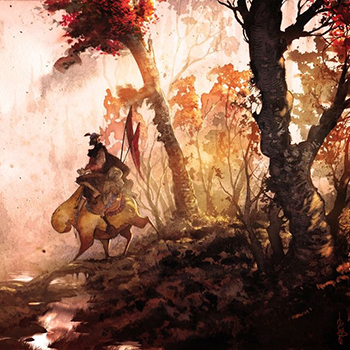 One of my fondest memories in gaming is getting together with my best friend in elementary school to embark on our next floppy disk adventure. Adventure game that is. And our favorite was the King's Quest series by Sierra. That was back in 1990 and we haven't been back to Daventry since 1998. But, absence makes the heart go yonder, and after a seventeen year hiatus, King's Quest is back, baby. It's back!

A lot has happened since then. Sierra, the creator of multiple seminal adventure games and leader in the genre, stumbled. After releasing Homeworld in 1999, the company went through a major reorganization, resulting in heavy layoffs and severe cut-backs to ongoing projects. Future reorganization under Vivendi leaves the company unprofitable, unable to produce a successful title. After Vivendi's sale to Activision, Sierra's doors were finally shuttered for good in 2008. Fast forward to 2014, and Activision revives Sierra Entertainment as a publisher to the expectant joy of many. On the same day, Activision announced that Sierra's first two games would be King's Quest and Geometry Wars 3: Dimensions.

Enter a small development studio called The Odd Gentlemen. Comprised of many fans of the King's Quest series of yore, they approached Roberta and Ken Williams, the original creators of King's Quest and founders of Sierra, to get their blessing to re-imagine the series. They said yes, and the rest is history. Consulting on the game's development, Roberta and Ken share their original inspirations for the game and The Odd Gentleman turned its development into a labor of love. Built for the fans by fans, King's Quest has returned as an episodic fantasy adventure filled with humor and story devotees of the original have come to expect and new players of all ages will love.

In this new re-imagining of the franchise, an aging King Graham reflects back on his life in a series of stories told to his granddaughter, Gwendolyn. Delivered in a frame narrative, the player is well placed in the perfect position to help guide the types of stories told. Will the next tale be one of heroism and wit, or a lesson to be learned? Only you can decide. And with three different endings, midpoints and countless interaction options complete with just as much dialog, what you decide matters.

And "countless" is not an exaggeration. In our one-hour demo, we were shown a single item interaction that had twenty different dialogs associated with it for every time you clicked. Not only have they guessed at every silly thing you might want to do in an adventure game setting, they built in those interactions and dialogs into the game. This is not your modern streamlined adventure. This is adventure gaming the way the 90's dreamed it up. In its typical choose-your-own-adventure style, many puzzles may have multiple solutions. During our demo, we were shown a long, multi-step puzzle in order to get across our current nemesis, the river. Afterwards, we were shown an easier solution that worked just as well. But will it affect the story? I don't know. King's Quest won't alert you to whether or not you're making an important decision that might affect what happens in the future.

Now, nostalgia is a funny thing when it comes to games and a franchise reboot always leaves me skeptical, but it seems like Sierra is doing it right. With many homages to the original included, the puns are back! Everyone in the demo chuckled and laughed throughout. In my opinion, it was refreshingly hilarious. But newcomers to the franchise can breathe easy, as every joke was designed to delight fans both new and old. If your humor is anything like mine, you'll find it to be funny, bright and intelligent. True to the hand-drawn essence of older King's Quest titles, The Odd Gentleman had each scene printed out and hand-painted with watercolors, giving it's visuals a unique and beautiful aesthetic.

If you've experienced Peter Dinklage in Destiny, you know very well that great voice acting is important. It can make or break a game's experience. Well, the new King's Quest not only looks beautiful, but it sounds fantastic. All that dialog in King's Quest comes with an all-star voice acting cast. You'll hear the likes of Kevin Wallace, Richard White, Zelda Williams and Christopher Lloyd. They take you through a tale that won't be your expected two hour chapter, a la Telltale Games. While they wouldn't confirm game length, they hinted that the first chapter would be around 5 hours long, not considering the replay value coming from the alternate paths.

If the entire game is anything like the demo I witnessed, King's Quest is shaping up to be one of the more exciting games to be shown at E3 this year. With the return of Sierra, there were a lot of promises made to the fans, both explicit and implied. It looks like King's Quest just might live up to all of them.