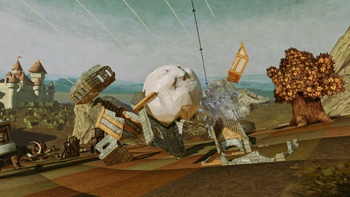 I've been to my fair share of E3s and I'm well aware that they're really nothing more than loud and obnoxious attempts to manipulate attendees into caring about whatever games publishers and developers happen to be pushing at that moment. I know it's all about business. I get it. I just don't care. I love E3 and all of its glitzy bombast. It's Disneyland for gamers, where every aisle offers new opportunities for fun. Maybe it's that big blockbuster you've been waiting to see all year, maybe it's the return of a beloved franchise, or maybe it's something brand new you've never heard of - whatever your particular kind of gaming treasure, it's there to be found, so long as you're willing to look.

With that in mind, here are my five favorite games from the show. Some you probably could've guessed, others, hopefully, will come as a bit of a surprise. As is always the case with these lists, I'm not saying these are the "best" games or the most important games or anything of that nature, just that these were the games that ranked highest on my personal "squee" meter.

5. LittleBigPlanet 2 - My adoration of Sackboy continues unabated, but his adorable grinning mug isn't why this game makes my favorites list, LittleBigPlanet 2's new toolset is. LBP fans created some truly remarkable and complex levels using the design equivalent of rock and sticks - even the Media Molecule folks were amazed at what they accomplished. The tools in LBP2 are even more advanced and easier to use, letting users remap the Sixaxis as they see fit, create microchips, and program basic AI. I can barely wrap my head around the seemingly infinite possibilities, but talented LBP fans have already used the new tools to create games within the game, like an RTS and a shmup complete with holographic enemies and high score. The platformer is still in there, of course, and has been tweaked a bit to make Sackboy a bit less floaty and easier to control, but the best of LBP2 has yet to come.

4. Rock of Ages (pictured) - "Delightfully weird" is a phrase that can be applied to just about anything Atlus puts out, and this twist on tower defense is no exception. The concept is simple: Put two towers across from each other and let them roll boulders at each other until one's gate is smashed. Add defensive measures like battle elephants and giant fans. Mix in the ability to actually steer the rocks as they head down the hill towards their targets. Top it all off with an aesthetic based on various periods of art history, and 2d characters that look like they were pulled out of paintings and you've got a game I can't wait to download when it comes out next spring.