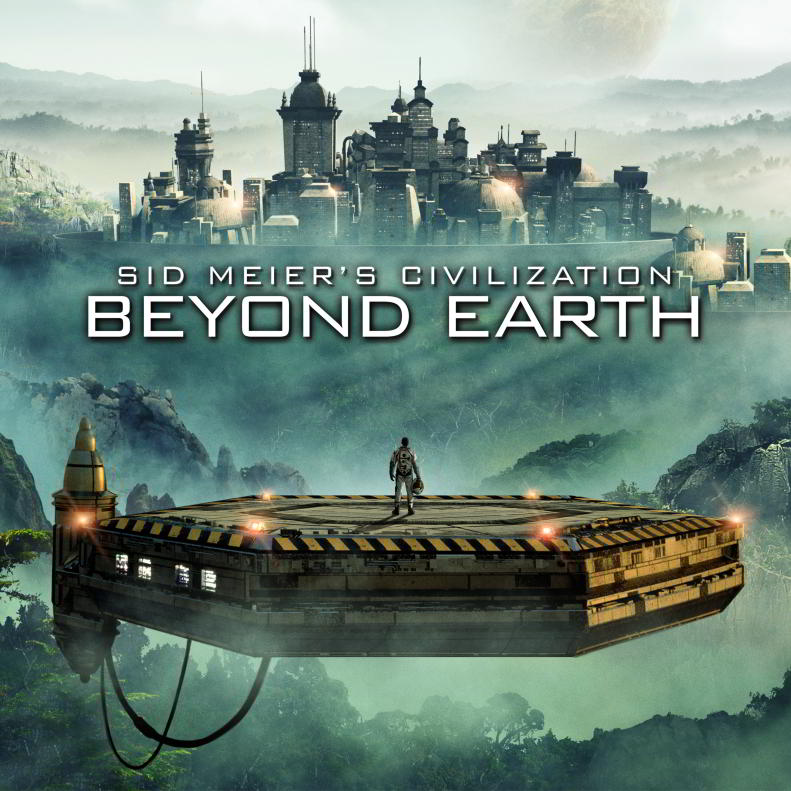 There are many topics about which Escapist Editor-in-Chief Greg Tito and I vehemently disagree. Baseball, for instance (he loves the Red Sox, I adore the Phillies). Mac vs. PC is a hotly debated topic. Denny's vs. IHOP is another point of contention. There is one thing we've always agreed on, though: our love for Sid Meier's Civilization. So, naturally, the 2K booth was my first stop on the E3 show floor.

Unlike Greg's lengthy pre-E3 session, my demo was only about 15 minutes, and strictly hands-off. In a game where a single campaign can take dozens of hours, that's not nearly enough time to get a firm grasp on just what Civilization: Beyond Earth is all about, but I did feel a few waves of déjà vu watching the presentation. As Greg noted, it looks very much like a sci-fi-skinned Civilization V; as someone who's sunk over 300 hours into that game and its expansions, I don't necessarily have a problem with that, but it would have been nice to see some more refreshing ideas presented.

There's the same hexagonal tiles, the civilizations, the land and sea units waging war--of course, this time those units are more mechanical and robotic in nature, and instead of barbarians, you'll fight hostile aliens as you explore your new home planet. Amongst the lush green vegetation are tiles of a purple haze. An extraterrestrial skeleton gave the Explorer unit a bonus, seemingly similar to Civ V's ancient ruins. No alien planet is complete without a giant worm, and the siege worm that gave me Dune flashbacks surged in and out of the ground as the player scrolled around the map; we were warned it would take an army to defeat that one, and the lone Explorer stayed safely away.

We got a quick look at the Tech Web, which isn't exactly the same as Civ V's skill tree, but the concepts are pretty similar; unlocking certain techs will raise the player's Affinity, whether they choose Harmony, Purity, or Supremacy. As Greg noted, Affinities work similar to how ideologies do in Civ V: Brave New World. In the demo, the player had chosen to go with Supremacy, the belief that humanity would be saved through use of technology. The Supremacy civilization needed Firaxite, a resource important for building units; however, it was currently in the territory of a Harmonious civ that wanted humans to be more like the planet's native species through gene splicing and mutations. War was waged, and the technologically superior troops made short work of the defending Harmony-embracing civ, which brought the demo to a close.

I left wishing I'd had more time to dig deeper and see more of what set Civilization: Beyond Earth apart from its predecessor. A 2K rep called it a brand new entry in the Civilization family, but it looked more like an alternate universe Civ V. That didn't stifle my excitement, though. Like I said, 15 minutes just wasn't enough time; I guess I'll have to spend dozens (or hundreds) of hours getting to know Beyond Earth better when it comes out later this year.

After playing the first 50 turns twice, Beyond Earth feels closer to Civilization V than Alpha Centauri.

Orignal Story: To say that I was interested in Sid Meier's Civilization: Beyond Earth would be a vast understatement. The last sci-fi game from the team at Firaxis - Alpha Centauri was actually the first game published by the studio formed from the ashes of MicroProse - was a huge timesink for me. At 2K's Pre-E3 event in LA last week, Pete Murray from Firaxis let me dig into the alpha build of Beyond Earth. I got to explore a new world from a set starting point until around turn 50, and then, while my colleagues all got up for lunch, I stuck around to play through it again. While Beyond Earth is certainly very different from a standard historical Civ, the gameplay had a lot more in common with Civ V than Alpha Centauri. I think that's a good thing, but my nostalgia for the old game got a kick in the nuts.

For one, the factions are all geo-politically based instead of divided by philosophy or religion. There's the American Reclamation Corporation led by Suzanne Fielding, and Samatar Jama Barre is in charge of the People's African Union. Other factions include the slavic Kavithan Protectorate and a group called the Pan-Asian Cooperative. But while there's less potential characterization up front than, say Nwabudike Morgan or Lady Deirdre Skye of the Gaians, co-lead designers Will Miller and Dave McDonough assured me there's a lot of personality underneath the old Earthbound national lines.

"When we began work on this game, we started with where we are right now, our geo-political landscape, and extrapolated 25 years until what we're calling the Great Mistake," said Miller. "The Great Mistake was a catastrophe that led to a humanitarian crisis and destabilized the nations of the world. Most of our leaders speak a combination of languages instead of just one language, which suggests that cultures blended and there were migrations of people. It is a departure from Alpha Centauri where those leaders were divided along ideological lines, where ours are more rooted in the past. But they certainly have personalities though."

While the new leaders may not be as recognizable as Montezuma's warmongering, the team said you will learn their stories as you play Beyond Earth. For example, the voiceovers when you learn a technology still use the leaders reading an excerpt from their work or a speech that may give a clue as to what affinities they are likely to pursue. "We want each leader to be a puzzle that you have to solve as a player through diplomacy, covert operations and just seeing how they react to certain situations on planet," Miller continued. (Check out my full video interview with Miller and McDonough here.)

In playing Beyond Earth, I started to discover other ways in which it differs from its predecessors. I started out with one city already founded, a soldier unit and a new unit called an explorer. I moved around the map, checking out landmarks that looked interesting, while avoiding alien units. Some of these buggers were easy pickings for my soldiers, like the ranged manticore unit, but siege worms were vicious in their attacks and were really tough to take down. 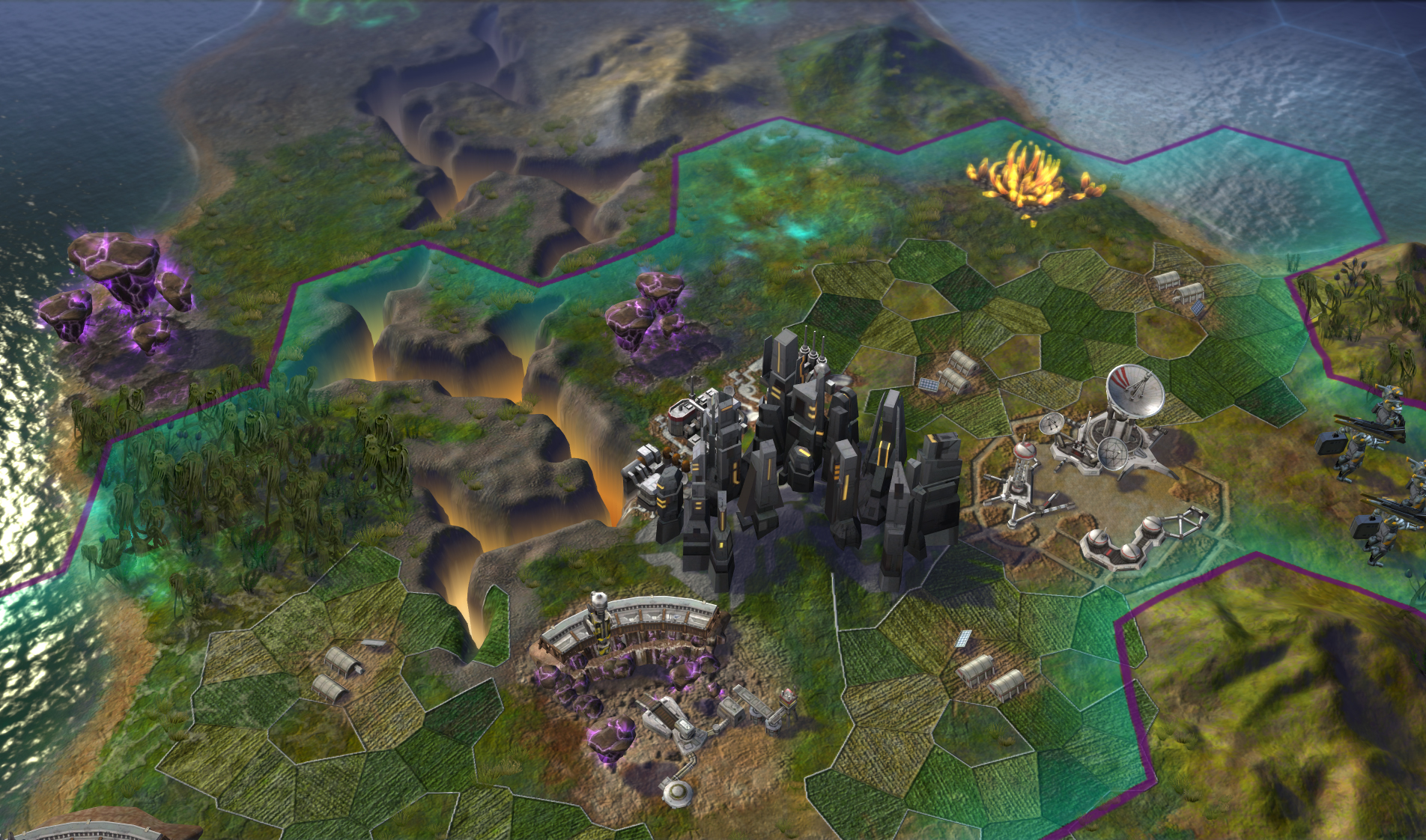 Pete Murray cautioned us before the session that attacking aliens would probably be a bad idea, especially early on, so I tried not to get into a direct conflict with them in my first playthrough. I was told the alien units act almost like their own faction. If you get on their bad side by killing too many of them, they will be more actively hostile towards all human players - a tactic you can use to antagonize rivals all over the planet.

My city was surrounded by green foggy hexes - called miasma - which is some pretty nasty alien shit. If a unit ends its turn in a hex with miasma, it will take damage. Miasma also diminishes the resources you can gain from the terrain, and prevents improvements from being built on the hex. You can't remove miasma until you get the requisite technology, so it will be an early nuisance for sure but it's possible you could use it to your advantage in the late stages. Think of miasma as analogous to the xenofungus from Alpha Centauri.

I was surprised to encounter an amalgamation of concepts found in Civ V in a science fiction setting. I got a quest saying two groups were looking for a charter to found an outpost near my territory and choosing one of them places an independent outpost on the map, similar to city states. You can then send trade units to these groups and create a trade route, earning you science or other resources depending on the group you chartered. These routes are mutually exclusive, so you might be fighting with other factions for the benefits an especially juicy charter can provide.

Researching techs is a big part of the Civ franchise, but it works a bit differently in Beyond Earth. All players start with one tech, and you can choose to research any of six technologies in a web surrounding the start, or a secondary branching tech. The related technologies, or branches, cost significantly less than researching in a whole new direction, so it encourages players to choose a path rather than cherry-pick from all over. Technologies are also the main way you can choose to influence your civ's affinity.