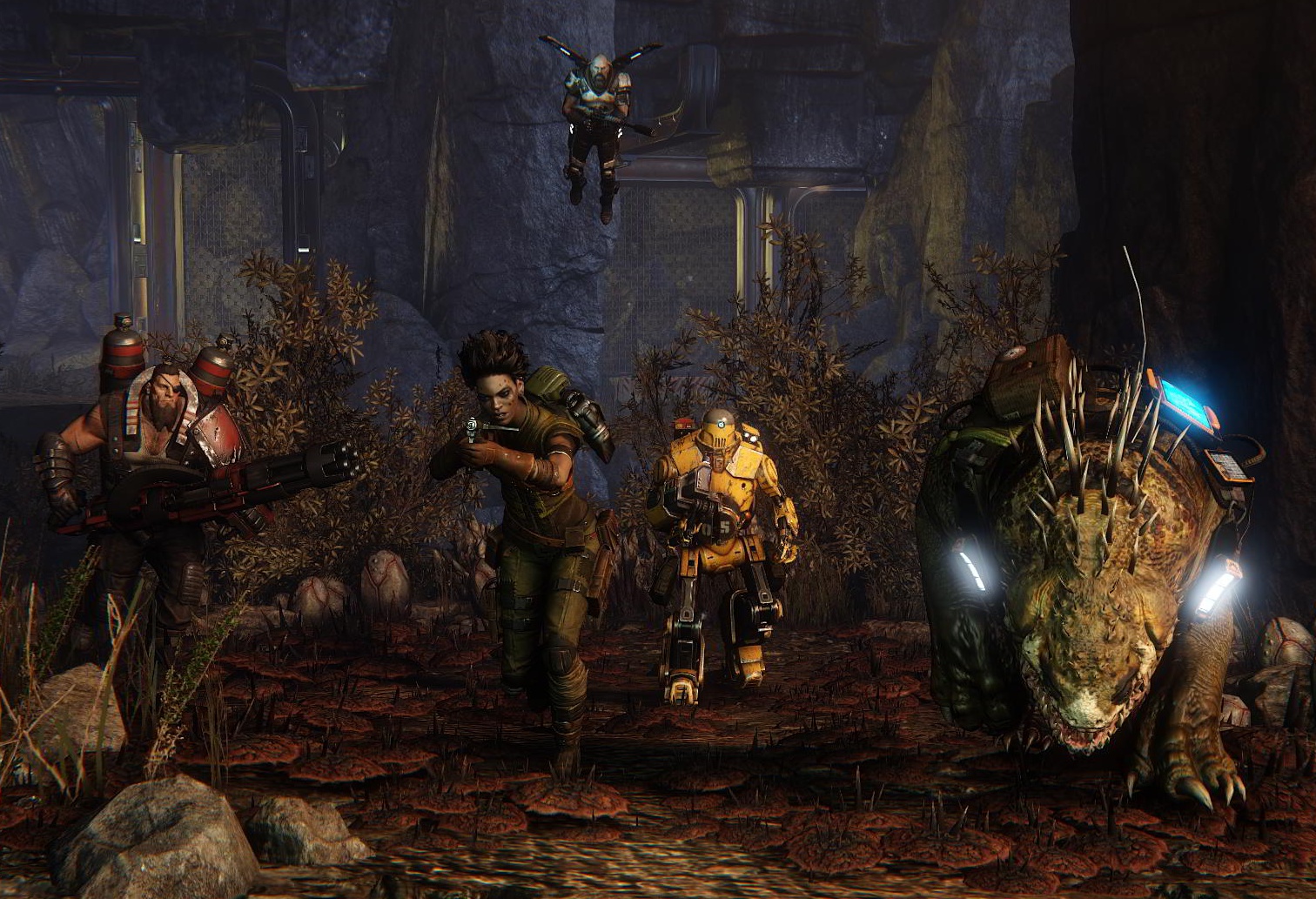 Multiplayer shooters quickly lose their appeal for me. It can sure be enjoyable to pop in and blast a few folks for a while, but I don't usually invest lots of time to progress past the first few matches. Evolve is a competitive multiplayer shooter, too, but it's a different beast. As you may remember from Justin Clouse's time with the game earlier this year, you can play as a one of four hunters teaming up to take down a big monster. The catch, of course, is that a human player also controls the monster who is trying to kill all the hunters or evade their attacks. When it came time to get my hands on Evolve at the pre-E3 event last week, I immediately volunteered to play the big bad guy, and I'm glad I did.

In the first match we played, I controlled Goliath - a hulking, fire-breathing behemoth. At the start, you can invest three skill points into four possible upgrades. Some are passive, like Goliath's damage-reducing armor, while others unlock abilities such as a charge attack, a fire breath, or tossing a huge boulder around. I went with a bit of a specialized build: two points in fire and one in charge. The fire breath is a great ability for my play style because I'm shit at aiming. Having a strong area-attack available from the get-go was going to give me a huge advantage. Not only in attacking the hunters, but in killing wildlife. You see, in order to evolve (get it?), you must consume corpses of fauna you encounter in the world. I'll get to that in a second.

I dropped into the environment: a sprawling cliffside map with tons of verticality and waterfalls. A representative from Turtle Rock Studios was guiding me and suggested I make a run for it as soon as I could because the hunters would be spawning in the same location in just a few moments. Goliath is freakishly agile for how big he is. The monster can also climb up pretty much any surface just by holding down the left trigger. The physics are still a little sticky there - I found a few jagged edges that wouldn't allow Goliath to get up, but in general the movement works well. And heck, I can jump too. Woohoo! Right into a bunch of birds ...

Crap. That alerted the hunters to my presence. The early game in Evolve is a cat-and-mouse affair. The player controlling the monster wants to evade the hunters as much as possible, while the trackers would do well to find the monster and deal whatever damage they can before he evolves.

OK, so you get the chance to evolve by eating the animals in the world (or the human players, but they don't go down so easily). A meter will fill up with blue, alerting you to how much more you need to eat. Once it was full, I tried to find a quiet place to start the evolution process. You get three more skill points to buy more abilities or upgrade, but once you do that there is about 10 to 15 seconds when your monster is vulnerable in the world as it bubbles and gurgles in a bloody mass of tissue. You don't want the hunters finding you as soon as you evolve - that bloody mass doesn't react well to bullets.