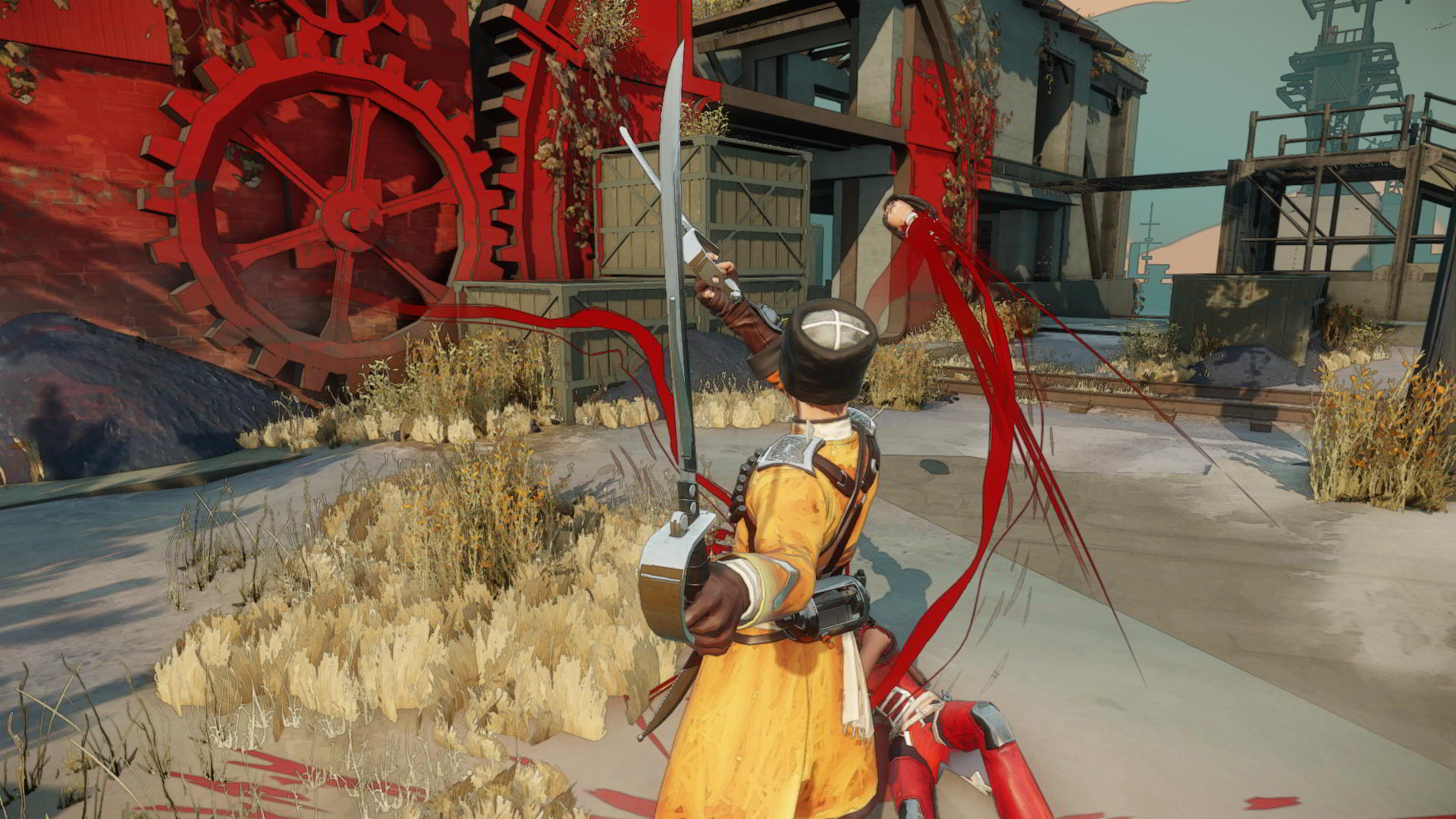 Update: Joshua Vanderwall
The word "frenetic" was thrown around a lot in the presentation leading up to the hands-on time with Battlecry, to the point that I was sure the presenter was just short on content, but when I got into the game, it was clear that it's simply the best word to describe the experience.

From the evasion roll - accessible by double tapping jump - to the magnetic-based grapple points scattered around the environment, which you can trigger from a great distance, allowing for major air time, the fast-paced action of Battlecry was surprisingly satisfying. The combat was similar, although I'm sure with some practice it would become slightly less chaotic. When you throw 16 people into a match, none of whom has any idea what they're doing, you'll inevitably have some hilarious results as people acclimate to the aiming, melee, and ranged combat systems. Watching two squads of cartoony characters flail wildly at each other until finally establishing hit boxes was endlessly entertaining. It took me three good tries before I finally sorted out where to be aiming when I want to stab, slash, or shoot someone.

On the recommendation of one of the team members on the floor I started off with the Enforcer, wielding a giant sword that transforms into an equally enormous shield. I've never been much for defensive play, though, so I mostly just hacked my way across the battlefield, only bringing up the shield when an opposing Tech Archer was pinging away at me from a distance I couldn't close. The Enforcer's slow, heavy swings are more difficult to land than the other playable melee class, the Duelist, but when he hits, he hits hard.

Switching over to the duelist - I played a rogue in WoW for years, so the dual wielding and stealth aspects were particularly appealing - I started having an even better time. Going stealth and sneaking into a 1v1 exchange, appearing behind a surprised enemy, and assisting your teammate in quickly dispatching them was satisfying and enjoyable. The special abilities, like a lightning blast (which they made clear is from a battery of sorts, not from magic) were fun to use, if somewhat difficult to master. The duelist's dash attack quickly closes the distance if your opponent is trying to escape, or if you're facing down a Tech Archer.


I tried out the Archer as well, but I'm definitely more of a melee player myself. It was quite hilarious to stand on a short building and ping away at the enemies in a mass battle below you, but I just prefer to be in the thick of the action, although I can certainly see the appeal.

By the halfway point in the match, it was apparent that my team was completely outclassed. The opposing team roved the map in a group, rarely splitting up, and we just didn't have that kind of coordination. It speaks well to the importance of teamwork, though, much moreso than in a casual game of multiplayer shooter of your choice. It doesn't really matter how good you are, you can't really stand alone against a squad of enemies. It's just not that kind of game. Battlecry is definitely something to keep an eye on. It's fast, exciting, fun, and equally brutal and beautiful. When you do get in the game, though, stick with your squad and don't wander off alone. This is clearly a game designed to be played with a team.

In 2012, when the Bethesda formed BattleCry Studios led by former BioWare Austin vice president Rich Vogel, the free-to-play business model was still pretty new. League of Legends was making some cash, but BioWare's big MMO Star Wars: The Old Republic had yet to go free to play. Still, Bethesda Softworks saw the opportunity in a free multiplayer game supported by transactions from its player base, and they created a studio specifically to take advantage of that trend. The result is Battlecry - a game set in a world that's outlawed the use of firearms and in which all conflicts are resolved in controlled battlefields called War Zones. It's a bit of an un-inspiring concept, but the cartoon violence and cell-shaded aesthetic is somewhat endearing, when you're not whaling away on your enemy with a huge fucking sword.

"For Battlecry, we wanted a highly stylized world, one envisioned by our Creative Director, Viktor Antonov, who you may know from his work on Half-Life 2 and Dishonored," said Lucas Davis, the Design Director of the game. "In Battlecry, we really wanted to contrast the brutality of our combat with the absolute beauty of our world. The distinct visuals of Battlecry are inspired by comics, illustrations and the game features this painterly style."

It's not a boast; Battlecry is attractive. The scenery of the level we played on did feel like as if you were playing in well-crafted anime painting. The buildings and industrial paraphernalia fit the vaguely steampunk/fantasy genre. The models are crisply animated, feeling akin to World of Warcraft's easy action with the non-targeted flow of combat in games like Elder Scrolls Online or DC Universe Online. There's no confusing the inspirations for this game - it's like World of Warcraft's Arena PVP, Dishonored and Team Fortress had a baby.

"We took inspiration from the highly animation driven action-combat of single player games," Davis said in his presentation at a pre-E3 event earlier this month. "Battlecry is a fast, frenetic, fun experience - one that's easy to jump into and one that shooter fans, action game fans, and multiplayer fans in general are really going to enjoy."

It's is hard to divorce the idea that the game has been designed to specifically appeal to the pleasure centers of the gamer's brain. The ease of movement, the briskness of pace as you respawn and engage in another melee or firefight, the swift-to-learn mechanics and controls all combine to create a fun, competitive and overall accessible experience. 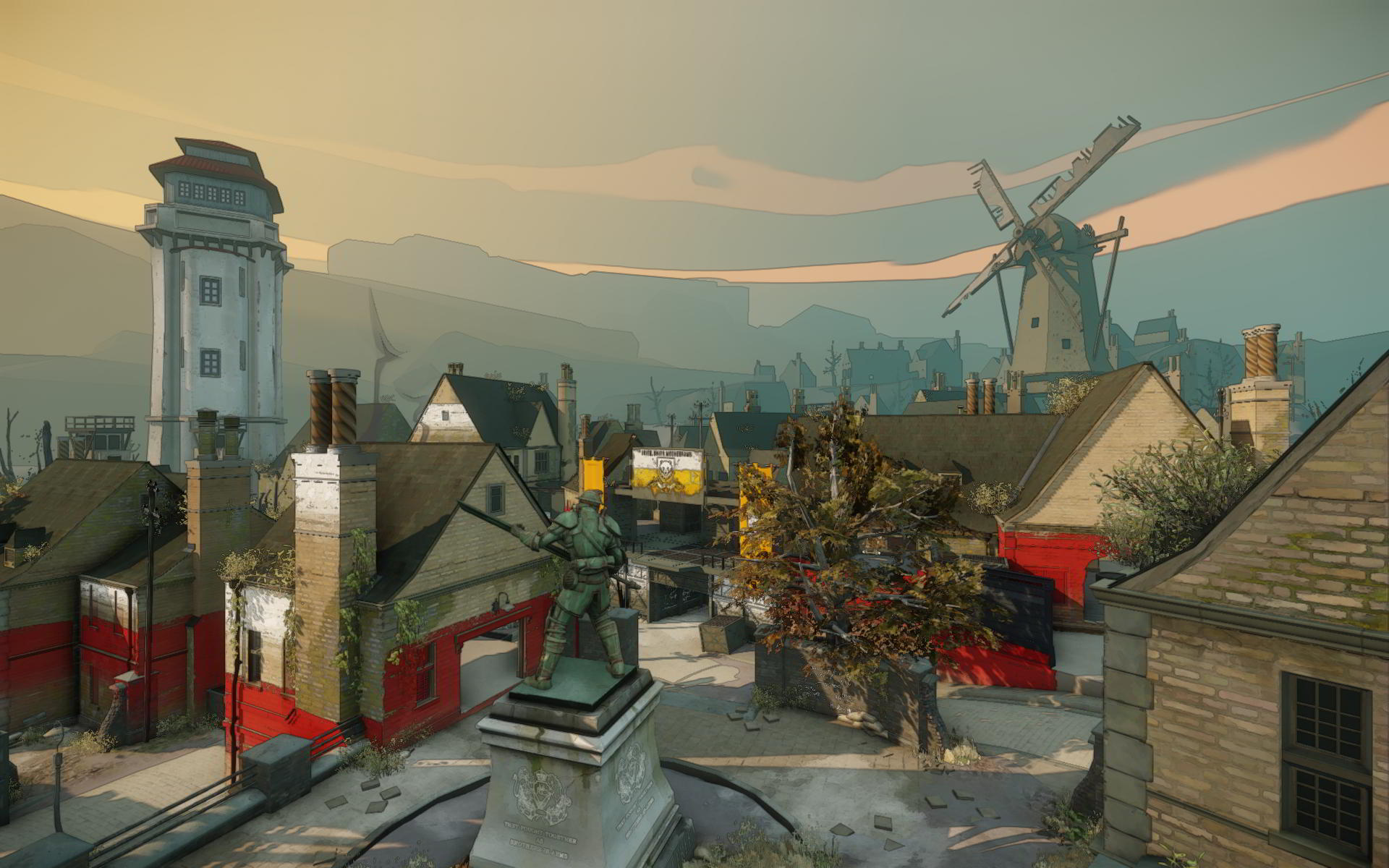 The steampunk aspect comes in from the utilization of Pansophic technology. Davis must have said this word ten times during his presentation before we played, and each time I swore he said "Pants-off-ic" - as if sexual energy was somehow harvested to create these wonderful gadgets. Sadly, Pansophic is just a made-up term like "Unobtainium" from Avatar, but that's not the only fabricated part of Battlecry's premise.

"We envisioned is a world without gunpowder," Davis said. "In the world of Battlecry, a world war has broken out hundreds of years ahead of its time. This is ended with what we called out Black Powder Treaty that has ended the use of gunpowder in war and instituted what we call our War Zones. These are protected regions where our warriors come to fight for their nations."

There are five available classes in the game, but only three were playable at the event. The enforcer is a big brute, who can deal out massive damage with a big melee attack but his shield is also a good counter to ranged fire from the tech archer, who wields a bow empowered with Pansophic technology. The duelist is a backstabber's delight, able to cloak to maneuver around enemies to deliver a lunge with a rapier from behind. All three classes play completely differently by using the various abilities on a cooldown and saving up adrenaline for an ultimate, with probably the enforcer being the easiest with which to pick up and succeed. The other two are finesse classes that will appeal to specific types of players.