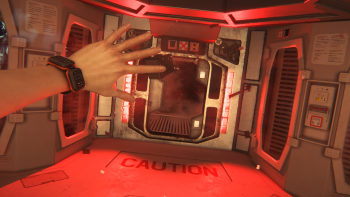 I never fired a gun. I sat down to play nearly two hours of Alien Isolation at the pre-E3 event in Santa Monica this May and I didn't shoot anyone or even waste bullets on the creature. I can report that Isolation is spectacular in both its presentation and feel. Many fans of the franchise were burned by Aliens: Colonial Marines - our own Jim Sterling was one of the more prominent critics of dishonest previews - so I caution you to remain skeptical about this and all previews. Still, given the honesty with which Sega and Creative Assembly have been with hands on time, along with the distinct lack of a vertical slice of anything, and I think you would be remiss if didn't give this game a fair shake. That is, if you are into harrowing retro sci-fi survival games ...

In case you missed Justin Clouse's announcement preview from earlier this year, I'll give you a refresher. You play as Amanda Ripley, the daughter of Sigourney Weaver's character from the films. Investigating the events on the Nostromo in the first film, you go to the space station Sevastopol in search of the flight recorder from her mother's ship. A single alien xenomorph is loose on the station, in addition to human looters, and Amanda has to sneak around both adversaries to further her goals.

The mission I played began with Amanda trying to escape through the station's medical bay. Most doors have been locked, so you have to get to the security station to institute a manual override and sneak back to the door. Here's one place where the specific plot doesn't really matter, because it's all about the gameplay. Controlling Amanda, you can crouch and sneak, or sprint, with the press of a button. Running is especially dangerous though, as your increased speed will immediately alert the alien to your presence. Run for more than 2 or 3 seconds and it's instant death for Amanda.

You have a motion tracker at your disposal, which looks and functions exactly like the one in the Aliens film. It comes up with a quick trigger press, and a green dot appears when it detects movement, even when the alien is in the crawlways above the space station's corridors. The motion tracker also doubles as an objective indicator, cleverly disguising a HUD element that might break immersion within the context of the game. 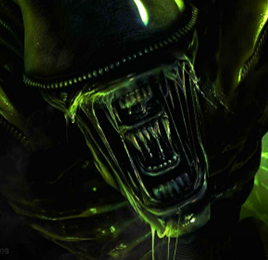 Because both the alien and the other humans on the ship are all dangerous, you'll be using the motion tracker pretty much all the time to plan your movements. You can even use the information to use the alien's indiscriminate violence against the looters. In the mission I played, I would often sneak around to get a bead on positions, then sprint to a hiding place like a locker to alert the alien, who would then go after the easier targets in front of it.

Speaking of hiding, you will be doing a lot of that in Isolation. Most lockers or enclosed spaces can be entered, and they conveniently have slits at eye level which let you view your stalker. The alien will enter a room and seek you out, and pass within inches of you in the locker, which leads to some tense moments. Sometimes merely hiding isn't enough - the alien can and will rip off the door of your hiding spot and kill you - so you have to hold your breath with a button press and pull back from the door to do all you can to be unnoticed. Even then, the alien will sometimes see through your attempts at concealment and kill you anyway. Did I mention this game was harrowing?

It will take a liberal amount of skill and luck to succeed at evading the alien.

Amanda can grab stuff to build makeshift tools like noisemakers and health syringes to aid her. The scraps available in the station all fall under categories like "sharp" or "gel" and these items can be combined using a funky-looking crafting menu that mimics the low-fi ASCII text theme running through the whole presentation of Alien Isolation.

Which I loved. The visual effects of the menus and UI, as well as the game's action itself, all feel very much like the '70s film which inspired it. There are VHS tape-like glitches, and lots of scrambled white noise on the monitors which every kid from the '80s will remember. Creative Assembly should win awards for its UI design alone. It's a joy to behold, increasing immersion in its world.

You do have access to some weapons. A flamethrower was my personal favorite, and it's effective at burning the humans on the station when you don't feel like stealthing around. The looters also have more conventional gunpowder weapons like pistols and rifles, but ammo is scarce and the noise they create upon firing would just bring the alien down anyway. But, as with running and hiding, you can use the noise to your advantage if you play smartly.

Even though I died more times than I can count - and cursed every fucking time it happened in pure frustration - I appreciate all Creative Assembly is doing with this game. It is bold to take a franchise away from its action in a video game to concentrate on slower-paced cat-and-mouse gameplay. From what I've played, it's easy to state that Alien: Isolation will definitely wash ACM out fan's mouths and replace it with the bitter taste of acid-flavored death.

And that's a good thing.