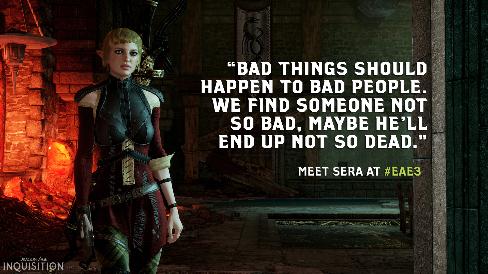 We've been hearing about the next Dragon Age for a while now. The jump to the next generation of consoles, not to mention expanding the scope beyond the single city or country the previous two games tackled, have made Inquisition a beast. Executive Producer Mark Darrah took the stage at Electronic Arts' pre-E3 briefing to explain the five pillars of their design strategy and impart a few nuggets of information to show just how huge this game really is. We didn't get any hands-on time with the game itself - which I'm still kind of miffed about - but Darrah did his best to tease Inquisition with some kick-ass slides and a new trailer.

"For three years, Dragon Age: Inquisition has been the focus of our BioWare studio," Darrah said. "It's the biggest RPG we've ever made - A multi-region open-world to lose yourself in and experience the best stories you can play."

Here's some of numbers Darrah pointed out to prove his claim:

One of the most interesting things of this iteration is how the story will morph and change based on your actions (or even inactions). "The world of Dragon Age: Inquisition will react to your presence and to the actions you take," Darrah said. "Our brand new Emergent Life System changes based upon the decisions and actions you make, evolving the world as you progress in the story. The Inquisition is your primary tool of influence. Use the War Table to send your agents on missions and decide where the story goes next. Rebuild and customize a stronghold to make it your own, or use the Judgment System to capture enemies in the world and decide their ultimate fate." 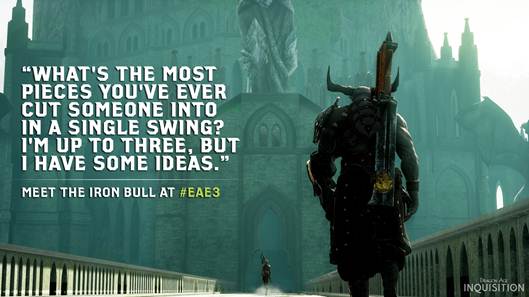 Darrah also confirmed something that will likely make fans of the tactical top-down view in Origins and the more action-based combat of DA2 both happy. "Play the way you want," he said. "Stay tight in and control one character directly or pull out and use Commander Mode to have more tactical options."

I'll reiterate that we were shown no gameplay, but the screenshots do look really pretty on new consoles and I'll expect the game will look even better on a beefy PC. The sheer variety of locations should improve on the one aspect of Dragon Age 2 people (not me) harped on: the lack of different environments. "This is the biggest RPG world that we have ever made. This is a multi-region open-world," said Darrah. "It's going to set the expectations for all of our games moving forward. Ten massive, open living regions that span two nations; A huge variety of environments from forests and deserts to swamps, mountains and much more. Each area has its own unique weather and ecosystem."

Still, look for our impressions of how Inquisition plays once we get a chance to see it motion on the E3 show floor this week. We'll update this story with our thoughts on the presentation, but EA and BioWare both confirmed that there will be no hands-on time with Dragon Age: Inquisition during E3 2014. That's an odd choice given the game is coming out only a scant 4 months away. Surely there must be a build worth playing to get people excited? Or perhaps they assume it will be a bestseller and impressions at this point could only hurt sales?