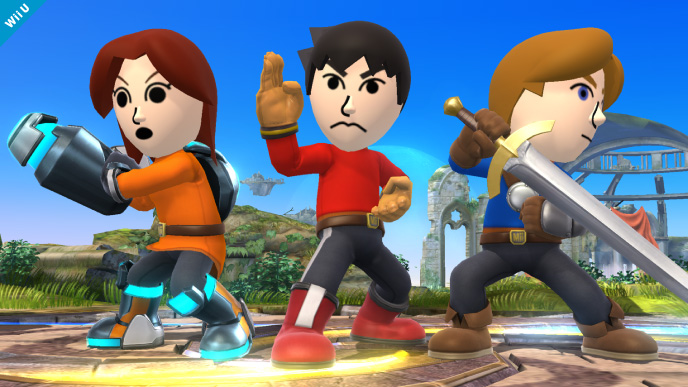 The latest character to join Super Smash Bros. is... you!

Update: According to the recently added how to play page on the official Smash Bros. site, Mii Fighters will not be available to play in "With Anyone" online, and can only be used in matches played with friends.

Original Story: Nintendo just opened up their Nintendo E3 direct with a crazy one-on-one Super Smash Bros. brawl between Nintendo personalities Reggie Fills-Amie and Satoru Iwata. As for which characters they were using? Well, they were playing as themselves! That's right, you'll be able to play as your Mii character in the upcoming Super Smash Bros. for Wii U and 3DS.

The Mii character will actually be split up into three different "archetypes" - The Brawler, The Sword Fighter and The Gunner - each with their own distinctive fighting styles. Furthermore, players will be able to chose four special moves from a pool of twelve different options per archetype, allowing players to customize their Mii fighter however they see fit.

This is certainly an interesting, and seemingly obvious addition to the game. Nintendo has pushed the Mii into pretty much every aspect of its systems, and even several games (such as Mario Kart). I wonder how it will effect the game's balance though? With twelve different abilities across three different archetypes, it won't be long before someone figures out the "best" combination - not to mention it will be impossible to tell which special moves your opponent is using just by looking at them.