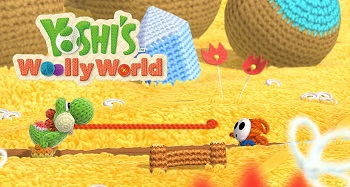 Yoshi's yarn-inspired platformer may not be deep, but it sure is cute.

This is the one thing that everyone can agree upon when seeing Yoshi's Woolly World for the first time. The follow-up to Kirby's Epic Yarn was first teased last year, but it wasn't until yesterday's Nintendo E3 Direct that we got some concrete details, like a title and release window-and of course, that it looks even more adorable than its predecessor.

The world of Yoshi's Woolly World is made up of yarn and similar textiles, and the colorful, playful environments just pop on the Wii U. As I played the platformer at Nintendo's E3 booth, I couldn't help but go "aww" at the yarn-infused presentation. The game just oozes charm down to the last detail: the way Yoshi's legs turn to string when doing a floaty jump; unraveling part of the environment to find secret areas; collecting balls of yarn and spitting them at foes. Yoshi's Woolly World is all about the cute, and as I played, people gathered around me, entranced by the adorable game.

Of course, cute only gets you so far, but Woolly World is also fun to play. The gameplay is fairly standard, as platformers go; anyone who's ever played one of Nintendo's many Mario games won't have a problem getting into this one. However, it also felt a little too simple, gameplay-wise, which is a problem I had with Kirby's Epic Yarn as well. One of the things I love about Mario platformers is the ever-expanding challenge of collecting all the coins, finding all the secrets, and beating every last level. I have no way of knowing how challenging Woolly World gets, having only played one stage of the game, but my first impressions were that it was a little too straightforward and simple. If it was the same game without the stunning presentation, would I have been as interested in playing it? I'm not sure.

Not every game has to be brutally difficult or punishing, though; there's definitely a place for titles that are just sheer fun and brimming with cuteness. Developer Good-Feel is definitely appropriately named in this case, because I had a smile on my face the entire time I played. I played solo, but Yoshi's Woolly World does support two-player co-op, which could add some replayability and challenge. We'll find out whether Yoshi can float on his oh-so-adorable presentation when the game launches next year on the Wii U.