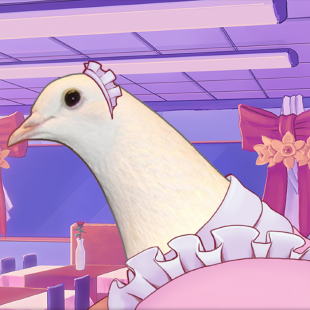 Hatoful Boyfriend's premise can only be called absurd, and it's absolutely hilarious.

Visual novel and dating sim Hatoful Boyfriend places you, the sole human, in a prestigious school for birds. From fellow classmates to a teacher to the school's doctor, you progress in typical dating sim fashion by moving through different routes. Every selection you can click will contribute to where you end up going. You have time in the first school quarter to meet the different characters and figure out who you want to pursue. Fans of the original Hatoful Boyfriend, developed by Hato Moa, will be pleased to know the human portraits of the birds on first appearance will be featured in Devolver Digital and Mediatonic's update of the game.

The characters have a lot of personality for the short amount of time many of the routes take to complete. Shown in the demo was the route for Okosan, a fantail pigeon who is based on Hato Moa's pet bird. Okosan is a bit strange; he's the fastest bird in school, even putting your human speed to shame, and he is obsessed with finding "the true pudding." By attending track team practices, spending time with Okosan during school, you and Okosan become good friends and eventually set out on a journey together. The conclusion to this route is too funny to spoil, but pudding is very important.

But as funny as Hatoful Boyfriend is, there's a lot underneath that playthrough of Okosan's route that wasn't shown in the demo. There are other characters who aren't as carefree as Okosan, such as the quiet mourning dove named Nageki whom you seem to see only in the library. There's no denying the game is hilariously strange, and depending on the route you take, you may not see what's happening inside St. PigeoNation's and in the world. Why are you the only human there? Why did you pass by a destroyed cityscape on your run? What the hell is going on in this game?

Having played the original before, I can only recommend that you play through all the routes and unearth the history of the school and the characters. Start the game for a laugh, but stick with it for a ride you wouldn't have expected by looking at the cover.

Mediatonic is keeping Hato Moa informed of their progress on its remake of Hatoful Boyfriend, to which she has expressed enthusiasm. This version will be more accessible to a wider audience since the original cannot be played on computers with a newer OS, and error messages are in Japanese. The text is easier to read, the game can be played full screen, the backgrounds are all new, and the same charm from the original remains. Devolver Digital will publish Hatoful Boyfriend this summer on PC and Mac via Steam, GOG, Humble, and other digital storefronts.

In Hatoful Boyfriend, all you need is dove.