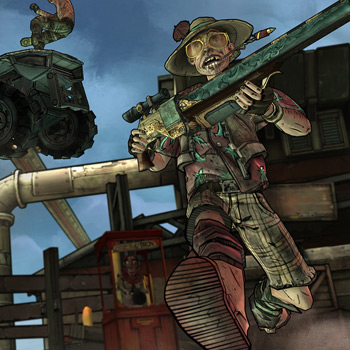 Who needs vault hunters when we've got liars and thieves?

I'm starting to wonder how long Telltale Games can keep up this hot streak. After releasing The Walking Dead in 2012, the little developer from San Rafael, California has managed to unleash a continuous stream of critically acclaimed adventure games. Someday, Telltale is bound to produce a real train wreck, but Tales from the Borderlands isn't it.

The first time that I heard about Telltale and Gearbox's plan to join forces, I couldn't help but be a little skeptical. After all, Telltale is known for its dramatic, emotionally charged storytelling, and Borderlands 2 includes a diamond pony named Butt Stallion. But after checking out the first 30 minutes of Tales from the Borderlands, I can already tell that my skepticism was at least partially misplaced. Telltale's repertoire is obviously deeper than I thought.

The game's storyline eschews standard Borderlands conventions. The primary protagonists, Rhys and Fiona, aren't weapon wielding vault hunters. They're just residents of Pandora who get dragged into a shady situation. Though, to be fair, they weren't exactly trustworthy to begin with.

Rhys is an employee at the Hyperion Corporation who daydreams about being the next Handsome Jack. Fiona, on the other hand, is a grafter who wants to leave Pandora but needs to put a little cash together before she can bail. The two of them obviously have a turbulent back story, but we only started to scratch the surface of their relationship when the presentation ended.

For the most part, Tales from the Borderlands is a simple point-and-click affair, the type of game that Telltale is known for. But the developer is breaking convention by including several complex pieces of gameplay. There's looting system and a wallet (though, Telltale is being tight-lipped about how these will work), and, at one point, a gigantic remote-controlled robot shows up.

It's hard to tell if the folks at Telltale are playing to their strengths with Tales from the Borderlands. I was pleasantly surprised by the dialog, and the characters are interesting. But Telltale's point-and-click delivery lacks the same frenetic energy that Gearbox's Borderlands naturally oozes. Plus, at the end of the day, Telltale's games are about storytelling, and the characters in Borderlands are fairly one-dimensional.

Judging from the demo, Tales from the Borderlands won't be a train wreck. But I worry that it'll fizzle in a way that will put a dent in both franchises.