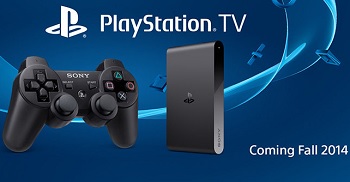 Released in Japan as PlayStation Vita TV last year, PlayStation TV is making its way east in the fall.

Sony's PlayStation media briefing on June 9 was full of gaming announcements, but there was also a surprising non-game announcement: PlayStation TV. Released in Japan last year, the streaming service is making its way east in a few months, and will allow gamers to stream games from their PlayStation 4 to any other TV. Not just any other TV in the house--any TV, anywhere.

At least, that's how Sony's Sharon Kapitula explained it to me earlier today. I stumbled upon PlayStation TV while on the hunt for something new to play, and I was taken aback by just how small it is. Unlike the bulky consoles likely cluttering up your media center, the unit is fairly tiny--you'll barely notice it.

For such a small box, it can potentially give you access to a whole lot of games. In addition to streaming PS4 games, PlayStation TV also lets gamers play PS3 games via PlayStation Now, and you can even access PS1 and PS2 games from the PlayStation Store. As for streaming services like Netflix and Hulu Plus, Kapitula wasn't ready to talk about Sony's third-party partners, but "stay tuned for more announcements," she said.

To get a feel for it, I played a bit of the console version of Diablo III, which was streaming from an enclosed PS4 just underneath the unit. The game played fine, and I probably wouldn't even have known I was playing via PlayStation TV if I hadn't been told--in fact, when I first walked past it, I thought the game was on display, not the service.

The $99 price point seems like a great value when you consider the PS4's $399 price, but obviously the value is based on how much you'll play PS4 games away from your console--and whether the streaming is as seamless as Sony has promised. Personally, as a member of a multigamer household, I find myself needing to take my games to another room, either to avoid spoiling the game for someone else or because the TV room is occupied; I also occasionally like to take my PS4 when I visit family or go on vacation, so I could see a PlayStation TV coming in handy. If you want to be able to use your PS4 on any TV without lugging it all over the place, PlayStation TV will probably be the best way to do it when it's released this fall.