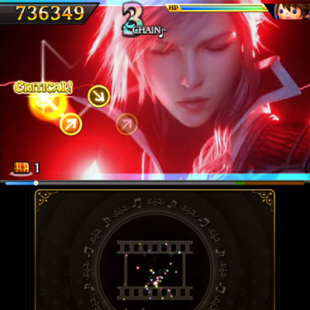 There's a certain kind of Final Fantasy fan Square Enix made Theatrhythm for - the music lover. Music in various Final Fantasy titles is celebrated for a reason. It's memorable, it's catchy, and it's beautiful. Playing Theatrhythm consists of listening to your favorite songs, watching cinematics in the background, and tapping the stylus to the screen in rhythm.

Theatrhythm Final Fantasy Curtain Call is easy to pick up and play, and it's well suited to the 3DS thanks to the stylus and touch screen. There are three difficulty settings from easiest to hardest: basic, expert, and ultimate. Don't get nervous over the last two settings' names. I was able to take on the ultimate mode without too much difficulty after one stage each on basic and expert.

Theatrhythm succeeds when the triggers are in time with the music. This seems to only occur on the ultimate difficulty, which means you'll be swiping and tapping away at the screen much more frequently and therefore paying more attention to the music's rhythm. Final Fantasy fans will enjoy engaging with the music, but it's still just as accessible to rhythm game fans with limited knowledge of the Final Fantasy series. It wasn't a particularly exciting title, but it was definitely more enjoyable the more challenging the difficulty.