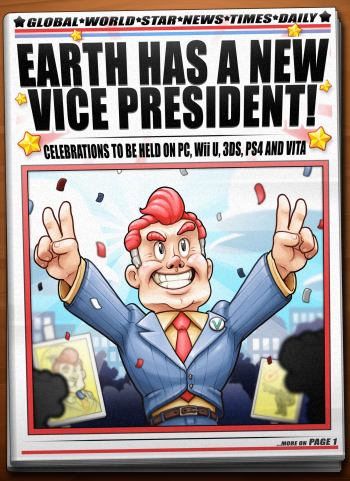 "Are you familiar with a game called Earthbound?"

This question, asked by Atlus USA PR guru John Hardin in a meeting room at Atlus' E3 booth, elicited a look of disbelief from me. "Uh, yeah. I am familiar with Earthbound," I said with a smile. As you likely know, the SNES RPG has taken on a legendary status in the nearly two decades since its release, thanks to its solid gameplay, modern setting, and bountiful humor.

Eden Industries' Citizens of Earth isn't Mother 3, but it's as close to a spiritual successor to Earthbound as we're likely to get in the foreseeable future. It's not retro-styled, with more of a cartoony look, but it's still easy to spot the influence of Nintendo's legendary RPG. The viewpoint of the game, the way characters and enemies move around the screen, and the absurd premise and objectives are all Earthbound-esque; in fact, right before my meeting, I caught my first glimpse of Citizens of Earth on the show floor and thought, "That reminds me of Earthbound."

The dry humor is where Citizens of Earth really shows its Earthbound-y roots, though. As the Vice President of Earth, you're collecting citizens who will fight in your RPG party. Each recruitable citizen has his or her own specific dialogue and skill set; for example, one of your first party members is your mom, whose special attack involves scolding the opposing foes. Sometimes you'll have to complete tasks or wait for story events to get people to join your party, and you can have up to three citizens trailing you at all times. In the turn-based battles, the VP delegates to his citizens, letting them do the dirty work. In a way, there's a Pokemon-esque approach to finding locals and forming a party, except you're recruiting humans instead of adorable monsters.

For a downloadable title, Citizens of Earth is a pretty meaty game--Hardin estimated it would take players 10-20 hours to complete it just doing the bare minimum, and around 40 hours with the numerous side quests. It was also, as Hardin pointed out, one of very few third-party Wii U games on the E3 show floor. If you're concerned that Citizens of Earth is more of an Earthbound-wannabe than a solid game in its own right, it's a valid concern, but from what I saw, the Atlus-published RPG has its own identity and plenty of charm.

It may not be the Earthbound sequel that fans have been begging Nintendo to bring stateside for almost 20 years, but Citizens of Earth is shaping up to be a treat for fans of old-school, turn-based RPGs, particularly those with a sense of humor. Throw in a recruiting mechanic reminiscent of Pokemon, and I'm sold. In addition to the Wii U, it'll be hitting the PC, PS4, Vita, and 3DS later this year, and I'm looking forward to seeing more of it.