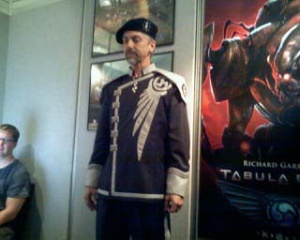 Chances are, if you enjoy even a passing interest in MMOGs, you know Richard Garriott (and if you don't, check out "The Conquest of Origin" by Allen Varney and "Richard Garriott: The Escapist Interview" by Dana Massey). You know Lord British, his online alter-ego from Ultima Online, is a name he takes seriously. So when he walked into the presentation room in which I was sitting in sci-fi military regalia - with a beret and black cowboy boots and spurs - and introduced himself as General British, I had to stand up and salute.

Garriott's changed his "name" to match themes with the latest version of his not-so-new-anymore project, Tabula Rasa. He views TR as one of the first games to completely abandon the first-gen MMOG formula - you know, the whole hack and slash stuff to get more powerful so you can go on to hack and slash bigger stuff with more impressive-sounding names model. While the game is still extremely combat-heavy and boasts some impressive AI, and its Diablo style single-skill selection and lack of targeting makes sure you don't just "highlight your opponent ... [and ignore] the 3-D world," it's just a vehicle for Garriott's storytelling.

Garriott says quests, as they exist in today's MMOGs, are "really just your excuse to go farm for [experience]." He plans on introducing a series of ethical parables into TR's quest arcs, if only to make the quest text something people will actually want to read. He says the quest arcs are long, and the choices you make have affect the world around you. In the particular quest he showed us, he had to choose an NPC to sacrifice to an eternity of suffering for the sake of defending an area. (Of the NPCs he had to choose, he'd been working with each of them closely - presumably for much of his character's life; think having to choose between Barret and Tifa.) According to Garriott, the game's full of situations where you have to make the best of the bad (or good) decisions you've made in the past.

Which says something about his new persona, General British. Abandoning his old moniker for the sake of his new game isn't a parable, per se, but it's definitely an intriguing decision, beyond the marketing aspect. In a field that definitely hasn't learned the right lessons from UO, Garriott's name change makes me wonder what of his past he's leaving behind, and what he's bringing with him.