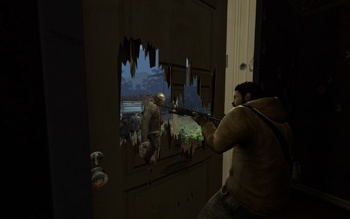 Left 4 Dead's premise is simple: The zombie apocalypse has happened, leaving just you and three other survivors to battle your way through hordes of the slavering undead to safety. Sure, it's a bit shallow as plotlines go, but it makes it far easier to simply jump into the game and start killing.

Although the "4" in Left 4 Dead could be Valve's nod to Prince-inspired titling, it's more likely referring to the four survivors that make up your crew in the game, which is multiplayer-only. If you don't have three pals to play with, bots will fill in as the other characters for you.

I played the PC version of Left 4 Dead (it will also be out for Xbox 360) and was pleasantly surprised by how much fun it was. Working together as a team is very important for survival, not because your skills complement each other - the survivors all play exactly the same - but because of the intelligence of the zombies trying to eat your guts.

Some zombies, for example, will vomit all over you (which is exactly as disgusting as it sounds), which not only makes it difficult for you to see, but also makes you particularly attractive to nearby zombies. Others will pin you to the ground and immobilize you, leaving you vulnerable to further attack.

One zombie in particular, the Witch, is especially nasty. She's harmless if you don't disturb her, but if you agitate her or get too close, she'll zero in on whichever survivor rattled her cage and swoop down on them. It's a guaranteed death sentence for the unlucky sod who earned her ire, unless his teammates can manage to kill her off before he croaks.

Trust me: You do not want to piss off the Witch. Watching helplessly as she eviscerates you is not awesome. (Ok, it kind of is, but you know what I mean.) You can also use your health items to heal your teammates and help them up when they've taken so much damage that they're too weak to stand.

The structure of each of Left 4 Dead's 20 maps (four scenarios, five maps per scenario) is essentially the same; you start in a safe room stocked with weapons and health items, progress through a part of the city, and end at another safe room. What keeps the game from becoming repetitious is the AI Director, which monitors how well your team is doing and adjusts the action accordingly.

If you're doing badly, with everyone on the team a few eyeblinks away from death, the Director will throw fewer, less aggressive enemies at you and drop more, robust healing items. Characters like the Witch will be placed further out of your way, so that you stand a better chance of limping your way to safety.

If, on the other hand, the zombies are falling beneath your might like so much grass before a mower, then expect their numbers to increase and the helpful items to be fewer and farther between.

Although each level's architecture remains the same, the Director also makes sure that you never know quite what to expect. We played through the same level twice (we all died thanks to an unfortunate incident involving a car alarm and a pipe bomb) and each playthrough was completely different. I planted myself in one location, waiting for the tank zombie that had showed up in the previous playthrough, but it never came. Instead, a swarm of lesser zombies came through the window that was, unfortunately for me, behind me.

It's fun, it's smart, it's fast, and it's easy to just pick up and play. A perfect recipe for a multiplayer game, if you ask me.

Left 4 Dead will be out for the PC and the Xbox 360 on November 4th, though cross play between the platforms won't be possible, because it's too hard to keep the versions in synch, according to Valve's Chet Faliszek.