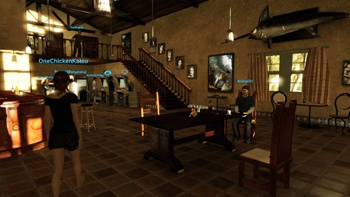 Jack Tretton promises that PlayStation Home will be worth the wait, but after taking a tour of Sony's virtual world, I still just don't get it.

I could never quite get my head around what Sony was trying to accomplish with Home, so I jumped at the chance to get a guided tour through the space. I came away with a much better understanding of how Home works, but still very much in doubt about its mass appeal.

My tour began in a communal town square. I materialized near some folks dancing and just generally hanging out. If I chose to say anything into my headset, anyone nearby would hear me, and I would be able to hear them. If there's someone doing some particularly obnoxious mouthing off, you have the option to mute them; if merely seeing them is enough to bother you, you can block them entirely, an option I'm guessing is going to see a lot of heavy use.

When a lobby begins to fill up, a new, identical one is created. To meet up with your friends, you can pull up a virtual PSP and invite them to join you, or simply hit the Go To option to instantly zap yourself to their location. Your in-game virtual PSP is linked to your PS3's friends list and lets you know who's doing what where within Home's environs.

The next stop on my tour was the Uncharted bar. So far, there really isn't much walking around in Home - you just zap yourself from location to location. It's more efficient, I suppose, but took away from the illusion that I was visiting the sites of my neighborhood. Perhaps that will be changed as Home develops. The Uncharted area was created using assets from the game and looked like a dive bar you might find in the heart of the jungle. The goal, I was told, is to give fans of the game an easy way to meet each other and discuss their love for Uncharted, Nate Drake, or treasure hunting in general.

It was a fun space, with some artifacts pointing to the location for the next game in the series and some simple arcade games in the corner. The Sony rep explained that the games were an example of ways in which interacting with Home could earn the user Rewards, like clothing or furniture for their apartment. Finish the game in the Uncharted bar, for example, and you might earn a baseball cap with the Uncharted logo on it.

There wasn't much else to do in Unchartedland, so we zapped over to the Warhawk space. It was similar to Uncharted, in that it was a club decked out with game assets, but it also allowed visitors to launch a multiplayer Warhawk game right from the room. Assuming everyone already has the game in their PS3s, firing up a multiplayer match is as easy as bringing up the virtual PSP, deciding on the game parameters, and hitting a button. An icon appears over your head to indicate that you're the one organizing the game; if anyone wants to join you, they simply approach you and hit the "join game" option. When your match is done, you're dropped right back into Home. Neat.

Sony talked a lot about non-gaming companies, such as Nike, taking an interest in Home, having their own spaces such as the ones I saw for Uncharted and Warhawk. What you do in those spaces - besides look at company logos - is still very much up in the air.

From a strictly technological point of view, Home is quite impressive. Hopping from space to space, seeing the different possibilities, was entertaining, and I could certainly picture myself visiting it to try out the bowling alley or simply to look around. But is it somewhere I would hang out? Would I actually use it to meet new people, or even chat with my friends? At the moment, I just don't think so.

The walkthrough convinced me that Home has some intriguing possibilities for interaction and community building, but it's a long way off from being anything more than a mild curiosity.