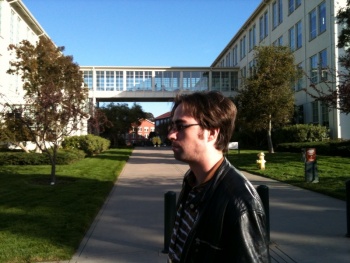 The fact that it was a black van should have been my first clue. They are always smiling, those Lucasarts press folks, and you genuinely feel as if they're your friends. And then the van shows up, and it's black.

We'd been asked by the mighty and powerful media giant to visit their San Francisco-based offices in order to see ... something. They wouldn't tell us what, exactly. We knew Bioware was involved and that it would have something to do with the forthcoming (no release date has been announced) MMO, Star Wars: The Old Republic.

Sometimes you turn down invitations, but never from Lucasarts. Never from the house Star Wars built. They could ask you to come over and have cookies and be unwilling to promise they wouldn't be laced with cyanide (contents of cookies under embargo until Tuesday) and you would still have to accept. Because it's Lucasarts, and because that's just the way it is.

So when the van pulled up, and it was black, there was no question whether we'd be getting inside - we would. End of line. Settling down and buckling in we even realized we had no exact idea where we were being taken. We assumed, of course. Everyone knows Lucasarts recently purchased and rehabilitated the sprawling military complex at the foot of the Golden Gate bridge called The Presidio. So that's where we were going, right? Right? They wouldn't say. These are not the answers you are looking for. Move along.

It was a tense ride. The van, being black, was warm. We were not alone, but no one knew any more than we. There was speculation about what we'd be seeing (A new character class? More Jedi powers?), but no one knew, and the speculation soon became grating. Even an educated guess is still just a guess when it's anyone's guess, after all. May as well shut up and enjoy the ride and worry about where the black van has taken you after it stops.

Luckily, it stopped inside The Presidio. Standing at the curb, an attractive (smiling) blonde waited, fists clutching what looked to be temporary visitor badges. Our names were printed on them. They were assigned, handed out, clipped to clothing and we were deemed cleared to proceed.

Looking around The Presidio, it was almost bizarre how pristine the place looked. The grass had been freshly cut, lending the earthy aroma to the warm Spring air. Hedges had been pruned immaculately. The sidewalks were clean. The vast expanse of The Presidio looked like the estate gardens of a madly wealthy man, which, in fact, they are. Yet none of this was done merely on our account. It always looks like this. This is the world of Lucasarts, where everything is perfect, and none of it is to be touched.

In fact, scanning the grounds it appeared as if there wasn't a single soul anywhere to be seen. Surely we'd seen one or two persons causally strolling the campus, but looking again - no. Not a soul. For a beautiful, sunny, warm day in early spring the lush, spacious, wonderful natural environs of this company of over 300 people were surprisingly devoid of life. As if it really all is for show.