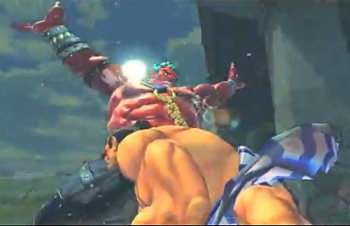 Of all the martial arts to design a Street Fighter character around, Capcom had to go with one of the most bizarre for their newest Super Street Fighter IV character, Hakan. They've got karate, muay thai, wrestling, boxing...let's see. What else? Oh, yeah. Okay: Turkish oil wrestling. The martial art in which gargantuan men slather themselves in oil and fight each other in a struggle for slippery domination.

Yeah... it's a little bit ridiculous. I got some hands-on time with Hakan - and the rest of the Super Street Fighter IV cast - earlier this week, and what I can say is that, well, I'm not sure what to say. Hakan's a grappler somewhere between the style of Zangief and E. Honda - not as powerful as the former and not as mobile as the latter. His gimmick is that he literally can drench himself in oil - giving his Hellboy-red skin a beautiful sheen - which gives his throws more speed and range. And, oh, what throws they are: Hakan will grab opponents in a monstrous bear hug, squeezing them until they pop out of his killer embrace.

Aside from Hakan, I took some of the new faces for a spin. Dudley, who drops in from the Street Fighter 3 series, is a force to be reckoned with: he's fast and easy to pick up, and will immediately appeal to players who like Balrog's punchy-boxy fisticuffs but aren't into the "hold down-backwards all the time" input style. Guy of Final Fight and Street Fighter Alpha fame should win over Fei-Long enthusiasts with his quick chain combos and nimble kung fu. And Juri, another one of the entirely new faces, has an enjoyably fresh style. In addition to rapid-fire kicks, she can do something few Street Fighter characters can - if you do a hadoken command and hold kick, Juri can store a fireball while she moves and attacks, which I imagine will lead to some nasty combos in the hands of the pros.

As for the old fighters, I took in a few rounds with Sagat, Ryu, Balrog and M. Bison, and at least based on my limited time, the differences (aside from each character now having one new Ultra move) aren't perceivable on a superficial level. All of the old combos I tried worked: Ryu can still juggle with an EX hadoken after landing an anti-air Shoryuken, Sagat still seems to be an absolute beast with his machine-gun rapid Tiger Shots and dominating Tiger Knees.

With all the old characters feeling about the same on the surface, it's a little jarring to play characters like Juri and Hakan, who feel a bit like they're from a different mold than most of the street fighters. It's encouraging to see Capcom taking some risks with their first (of at least five or six, I'm sure) iteration of their most successful fighting game in years, but I have to wonder how the entire roster - which is decidedly crowded at this point - will mesh together.

Fighting games are like MMOGs in that they take time to reveal their true colors after they're in the hands of their most dedicated players. It's too early for me to tell how exactly the game is balanced and tuned, how the old fighters have changed in subtle ways, how those classic characters may or may not have been tweaked to adjust to the new additions.

Regardless of all that high-level fighting game mechanics mumbo jumbo, SSFIV still seems to capture the same accessible but satisfying flavor of fun that SFIV did. Plus it's priced at a markdown ($40 MSRP), so anyone with an itch to lay some smack down - or, I guess, pour hot oil all over their skin and slide around in the dirt - should have plenty to look forward to this month. Grease up your wallets, folks!