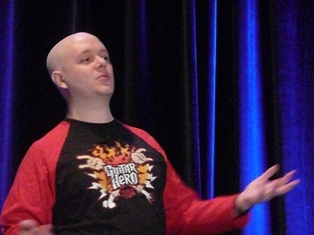 Richard Rouse III, designer of The Suffering, listed five different tools that designers can use to elicit an emotional response in gamers.

People have always asked the question, "Can videogames make us cry?" Richard Rouse III set out to answer that question in a panel at GDC 2010. Rouse, known for designing the The Suffering and now at Ubisoft Montreal, is certainly equipped to answer this question, having written a book called Game Design: Theory and Practice as well as being an accomplished designer himself. He cited the Electronic Arts advertisement from 1983 which originally posed the question of crying in games, and despite some designers claiming that the topic is outplayed (Including Steven Meresky who told Rouse that his panel was "so 1993.") it remains an important issue to the industry to this day.

So how do we do it? The first way Rouse suggested was through reminiscence. There is something heart-wrenching about looking back through your life and witnessing everything that you've accomplished. Rouse effectively used the Johnny Cash song "Hurt" to illustrate his point and played a clip from the video which shows the old musician looking at scenes from his life. "Johnny Cash hasn't had a particularly sad or tragic life; in fact, it's sort of a triumphant life. He's at the peak of his power at the end of his life," Rouse said. But the fact that Cash sings the song in such a weary tone, at the end of his days, you get a feel for the tapestry of what he has accomplished. Other forms of media use this framework of looking back, such as the films Titanic or The Notebook.
In games, Rouse specifically points to the conclusion of Fallout 3 as using this technique. "The end of the game is sort of a sad time in itself. I'm not going to be able to play this anymore and look of all these great things I've accomplished," Rouse said. He encouraged designers to take this farther. "I'm not sure this is necessarily tear-worthy, but I think it shows the direction that can be pursued. Fallout 3 is a fairly primitive version of this framework and something more advanced might do the trick."

Next, Rouse talks about amplification by abstraction. Sometimes, the less "real" a game looks or sounds can heighten the emotional response. The indie game Passage was a great example of this concept. The fact that the characters were so pixilated and unreal allowed gamers to put themselves into their place more easily. "The reason this works at all, and people have talked about crying playing Passage, is because it's these two little pixiliated characters not some photo real person who you're leading through this world," Rouse said.

Another way to get an emotional response is through the transformation of characters from weak or flawed into something greater. A perfect example is It's A Wonderful Life which makes people cry every year during Christmas. The gaming analogue might be something like the climactic moment in Bioshock where many of the people you've been helping rise up and aid you (I'm being especially vague as to avoid spoilers but you get the idea. Incidentally, Rouse didn't use any spoiler tags in his speech.)