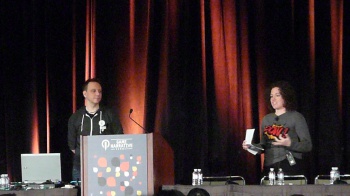 The narrative designers at Ubisoft Montreal wanted to make a game about something that matters.

The Narrative Summit at GDC 2014 in San Francisco is a place for game writers to exchange ideas and best practices. Jill Murray and Hugo Giard from Ubisoft Montreal began the track of presentations with an investigation and explanation of their work on Assassin's Creed IV: Black Flag, more specifically the Freedom Cry standalone DLC which starred Adewale, a black pirate ship captain. The story of a dark-skinned protagonist fighting to free the slaves living on plantations in what would eventually become Haiti might seem like the wrong choice for a team of French Canadians to work on, but Murray believes it's important for the game industry to be as representative as possible.

"Be curious about the people in your cities, in your communities," Murray urged. "Help their stories be seen."

Giard added, "Just be careful not to judge or appropriate their story."

That nuance of showing the experience of slaves in the Caribbean without it feeling false was accomplished through extensive research. Ubisoft Montreal takes the historical accuracy of its Assassin's Creed games very seriously, going so far as to hire a historian to be on staff for each game. As you might imagine, it is difficult to find first-hand accounts of what it was like to be a slave in the 18th century, and any documents that do exist are written by the white colonists. Those accounts are, according to Murray, "appalling."

But the historian hired for Freedom Cry curated a website that has collected classified advertisements made by slave owners looking for escaped slaves. "We know that this slave was named Castille, which is one step closer to understanding the nameless multitude of slaves we were writing about," Murray said. "We also know Castille was a cook, and we all understand cooking so there's another way to humanize the characters we were trying to portray."

The mere fact that the team was making a game with slavery as a theme was an intentional choice. There are films in which 'fun' is not the emotional goal, such as Django Unchained or 12 Years a Slave, and Giard wanted to tap into emotions like righteousness and revenge as motivators instead of mere pleasure. "Strong emotions can be more important than only positive ones," Giard said.

Murray added some examples. "The relief of overcoming an obstacle, the exhilaration of escape," Murray said. "We can get to those feelings from all corners of the human psyche."

Freedom Cry's theme changed some very basic game mechanics as well, which had profound impact on player's emotions. When the protagonist of the original game, Edward Kenway, raided a slave plantation, he got a monetary reward. When Adewale did the same, his reward was to release the slaves, which changed the motivations of the player substantially.

There was also a change to the A.I. that made players change their actions. When Adewale attacked the overseers on plantations, the master would begin killing the helpless slaves, not just the player. "This made players much more likely to use stealth when attacking the plantation," Murray said, noting that Assassin's Creed developers are always searching for ways to motivate stealth over direct action. Here was a narrative or emotional reason for stealth, and Murray appreciated its success. She also noted how not being able to save every slave conveyed the helplessness and dire plight of these people much better than a cutscene or a QTE would.

Spoiler Alert: Stop reading if you do not want the conclusion of the DLC revealed.

But there was one aspect of Freedom Cry that used QTEs and removal of player agency to great effect. Adewale is sent to save a slave ship, but it's a trap and the French navy fires on the ship. It sinks, drowning most of the slaves aboard. There's no way for the player to save them. "This combines all the things I hate about game design - QTEs and removal of player agency," Murray said, but it worked to emphasize the theme of the game. "Stripping the power away from the player was extremely effective at showing helplessness and loss." She cited games like Papers, Please and Papo Y Yo that used these tools just as effectively to make players feel something atypical in games.

"We are used to playing the hero," Giard said. But it can also be important to flip the narrative conventions of games in service to a message or theme. Murray said players responded positively Freedom Cry, some saying they cried, or needed to put down the controller and take a walk.

"But they picked up the controller again and finished the game," she said.