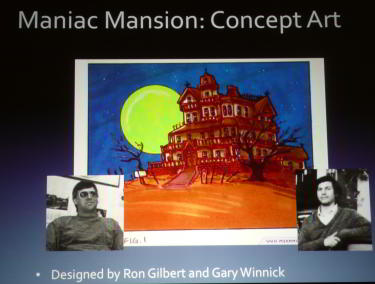 Habitat never ended up being played over the phone lines like it was designed, and that was partly due to the fact that it was so groundbreaking. "There was always a faction at Q-Link who didn't understand how to talk about it," Morningstar said. So it was killed. But the things Habitat did had lasting impact. Morningstar had to come up with ways to send packets of code over the small data limits modems had at the time. He's still using the basic architecture he come up with then today.

"People said 'You can't do that.' Well, we didn't know we couldn't do it so we did it anyway and it worked," he said.

LucasFilm Games was told they couldn't work on any Star Wars games. "I wanted [Rescue at Fractalus] to be a Star Wars game and I was told right off the bat that I couldn't do that," David Fox said, and he was pissed off at first. "I joined the company because I wanted to be in Star Wars."

But the rest of the panel agreed that being forced to create new ideas and new stories was actually a very important part of their success. They didn't have to work on the constraints of that sci-fi story. They could create their own. "We got to do our own creation," general manager Steve Arnold said. "We were the only ones, other than George, who got to create new stories."

Falstein said that had some strange effects within the whole of the LucasFilm empire. "I learned later that there was a lot of jealousy from the rest of the company," he said. "These creative people were constrained by having to work within Lucas' vision and here we were making whatever we wanted."

In fact, the funny thing was that George Lucas had very little to do with the team. "George spent two or three hours per year working with our team directly," Falstein said. Initially that felt like they were being neglected, but it ending up being a net positive.

Ron Gilbert was the young buck who made Maniac Mansion in 1987. "The first time I met George Lucas, he and Steven Spielberg had shaved off their beards to sneak into a showing of Star Wars without being recognized," he said. "I first met a George Lucas without a beard. I felt ripped off."

Gilbert is, of course, the mind behind some of the most memorable LucasFilm Games (and LucasArts titles like Monkey Island) but that all started with a crazy adventure game about teenagers getting trapped in a mansion. But it almost wasn't. In fact, Gilbert thought he was going to be fired. "At one point, Steve pulled me into his office, and I had a talking to," Gilbert said. "The game wasn't progressing. David Fox came on because we needed an 'adult' on the team."

What Maniac Mansion needed was a scripting language. Gilbert actually spoke to Chip Morningstar and the tech wizard created the backbone of famed SCUMM engine over a few days. It's that engine which laid the groundwork for all of the LucasArts adventure games to come.

It's those adventure games which shaped one of the most interesting competitions between game companies, mostly friendly. "I was jealous of their success," Gilbert said of his relationship with Sierra. "King's Quest sold like 10 times the amount of Maniac Mansion." But Gilbert also said that the popularity of Sierra pushed those at LucasFilm to make even better games.

"We actually had a friendly baseball game once," Gilbert said. "Which they won. But I'm not bitter."