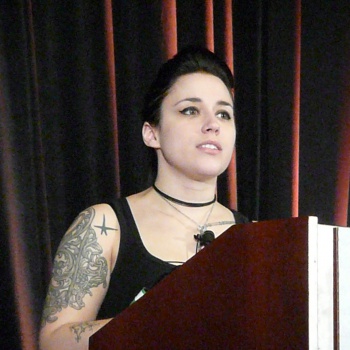 Nika Harper, formerly of Riot Games, made some great points about how to prepare for the hateful comments you'll get on the Internet.

It's a sad but true phenomenon that people on the Internet can often be cruel. Just this morning, someone on The Escapist forums referred to me as a "social justice creampuff," which is actually kind of funny because I would love to be a delicious pastry that fights crime. We can still be hurt by the comments people leave beneath something we create, and it likely won't ever stop, so as a driven, passionate and creative person that releases things on the web, you should prepare. Nika Harper has had her fair share of abuse - creating videos once a week for the League of Legends community will give you lots of experience in that regard. She gave a presentation at GDC 2014 which smartly provided the tools you'll need not to tolerate abuse per se, but to prevent it from hurting you.

If the Internet is the Wild West, then you should probably have the right defense at hand. "You don't want to go into a gunfight without knowing what a gun is," Harper said, adding that as creators, they feel an intensely strong connection to their work. "We have put our heart and soul into it," she said, so when people attack them or their work, it can feel intensely personal. "We see it as a legion of voices telling us to stop doing what we do."

Another reason why some comments cut so deeply is because it is often what we tell ourselves. "We listen to the one negative comment because it echoes our internal fears," she said. "We have to shoulder the burden that someone, somewhere, doesn't like what you do."

It may be a useful exercise to try to approach the hateful or negative comment with cold, hard reason. "It's bold to face cruelty with an analytical mind," Harper said, but sometimes it can get at the root if you ask yourself what is this person actually trying to say. "It can be quite a brain teaser.

"It's possible there's some valuable feedback, although the delivery could use a lot of work," she continued. Most of it is noise but there can be nuggets of meaning you can collect if you approach the negativity with a level head. "If a person says I 'talk too much' then maybe they really care about the content but maybe there is something wrong with the way I'm delivering it."

Not all feedback is valid. "If they say I have too many tattoos and I'm 'making myself look ugly' then they have an unreasonable expectation of who I am and I give zero fucks about it," Harper said with a laugh.

Harper also identified the three archetypes she usually encountered in internet comments, and what they hoped to achieve from posting. There are those who feel threatened by your content, that you are depleting them of their own voice and therefore try to prove that they are better or at least as worthwhile as you are. There are the overzealous fans who make sure to tell you that the reason they don't like you has nothing to do with this thing that they love. For this type, the fact that a patch or a game is bugged or broken hurts them very much, and they feel justified in their anger. "Then there are those who just like to watch the world burn," Harper said. The inciters. Those who may not actually hate you, but will say hateful things in order to get a reaction out of you or your supporters.

"They are not real," Harper said. None of them are. They are just voices in the aether giving life to a random thought. And the thing is, we now know from studies, the people who leave hateful comments don't perceive you as real either. Anecdotally, I've seen that when I confront someone or respond to them directly, the uniform emotion they respond with isn't anger or fear, it's surprise. Most of them don't even realize there is another person at the other end reading those comments. It's just noise.

Harper concluded her talk with some advice. "Avoid looking for feedback or validation when you are at your most vulnerable," she said. We're always exhausted, but perhaps it's not a good idea to keep clicking refresh on that comment thread just after you post something at 3 in the morning. "When we're ready to go into battle, we have our armor on." The same should apply here.

"All that really matters is that you stay safe," she continued. "That's what surviving in a hostile environment is all about. And above all: Don't stop creating. Don't change who you are. Some of the best and most important messages are going to get the most blowback."

Keep making your art. Prepare for battle. And let the noise wash over you like breakers on the shore.

If you're looking for more Nika Harper, you can check out her vlog on Geek & Sundry here.