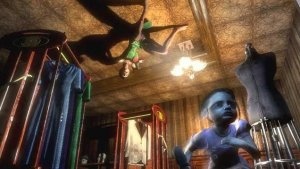 TE: How are things with Take 2 after the acquisition/merger?

KL: They got behind us for BioShock. They believed in it, even though I'm not sure I entirely did in terms of its commercial viability. I always thought it would be a good game. They gave us almost total freedom to make this thing. I'm really grateful for that.

TE: Were you surprised that BioShock did so well commercially?

KL: Yeah. You know, after you do game after game that gets good reviews but doesn't really move in the marketplace, you sorta start wondering if you've got a curse. But it wasn't a curse, it was - I think we never had the resources before to make a game and make mistakes. What did that money buy? ... It bought us the ability to make mistakes and learn from those mistakes. To have the money and resources to correct them. And that's really what BioShock had that we didn't have before.

TE: Do you think being able to make the jump to consoles gave you extra opportunity there?

KL: I believe it gave the publisher confidence financially, that they'd recoup their investment, where on the PC side it's tougher right now. So, yeah, I think it certainly helped us.

KL: We've learned that what we're strong at is creating great worlds for the player to experience, unique and interesting worlds that have unprecedented level of detail. And we're really good at figuring out what those details are, I think. If you start with System Shock 2, it's crude now, but I think it felt more like a real space than a lot of games did back then. ... We strive for the next level, and I think we're gonna continue to do that, making that world feel real, or at least consistent to itself. That's really important.