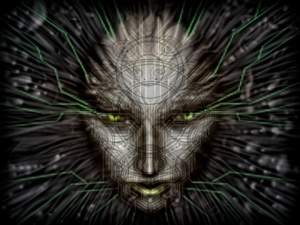 TE: You know, I have to tell you, I still have nightmares about those damn monkeys.

KL: The monkeys were cool. Sometimes you think things over and you labor over them and nobody cares about it, and sometimes it's like a moment of inspiration. The monkeys ... we were doing a mocap session, and we had some time left. So I'm like, "Well, why don't we do some monkey animation?" And then I had this idea of how to use them, and you know, with the sounds Eric [Brosius] put in, hearing those guys in the distance is very, very effective. It's one of the first things I talked about in the panel is setting the scene. You come in the medical area and you see these monkeys on the operating table with blood around them. It tells you a little story about what's going on around there, in a very crude way back then, but it was the first sort of experiment we did.

TE: In all of your games, the environment tells the story. As you run around, you develop the story, not through cut scenes but by actually rewarding people for exploring. Do you see yourself as a storyteller in that regard, or is it more of a game design thing, or both?

KL: I kinda defined it yesterday in my talk as narrative instead of storytelling, because that's different from what we thought of as storytelling - you know, "Here's some game, here's a cut scene, here's some game, here's a cut scene." Instead of rewarding the player with a parallel path to your gameplay, to integrate it with your gameplay as much as possible. I think that's a place that has a lot of very rich earth, very tillable earth. It hasn't been explored a lot. I think BioShock took some nice steps there. And I think the axis of where games are going, from more cut scenes or more in-game narrative, I guess the answer is in-game narrative - as an observer, not a partisan for in-game narrative. But that excites me, personally.

TE: Do you see anybody else out there who "gets it"?

KL: I think Valve did a great job with Portal and bringing that into the game. I think Sid Meier's games, even though they don't have a specific narrative - like "this happens and that happens" - the ability to create your own narrative in games like Civilization and Railroad Tycoon and all those games, you always remember those little moments where something happens. That dynamically generated narrative is very exciting. It's not my specialty, but Firaxis does a great job with that. What BioWare is doing with Mass Effect is a little different than what we were doing, but they were trying to expand the option space for narrative. I think it was a good year for that.