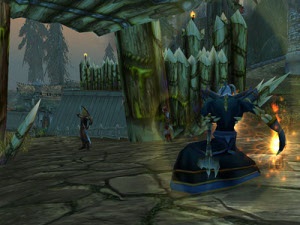 TE: What are you playing now?

KL: I'm always stuck in WoW, always soloing, mucking my way through. I'm playing my DS. I just picked up the DS Mario Bros. game. I didn't like it at first, but now I've gotten back into it and really enjoying it. I'm playing Sins of the Solar Empire, which I'm enjoying a lot. And, you know, Rock Band.

KL: I really enjoy drumming because it's new and you kinda feel in an incredibly lame way in your living room that you're actually drumming, but you're not. But it feels that way. That's what it is, that's core fantasy. All games are about core fantasy. I have a lot of friends at Harmonix, and I applaud them for their understanding, for giving that core fantasy in a powerful way.

TE: Is that something you'd like to incorporate in your games? Something more tactile than more intellectual?

KL: I don't start with that. I start with "What's the core fantasy?" The tactility of the guitar thing, somebody said, "Wouldn't it be cool to be a rock star?" And that's how I think about it: "Wouldn't it be cool to do this?" Rather than saying I want a tactile experience - what the fuck does that mean? ... I don't get up in the world to have physics and terrain destructibility, I get up to play a game to a fantasy experience I couldn't have in the real world.

TE: You said you're playing World of Warcraft. Do you see any area in the online space for you to do what you want to do with multiple people involved?

KL: I think narrative is very strong in World of Warcraft. I don't follow the real story - I don't know what the Burning Crusade is, I don't know who the Lich King is, and frankly I don't care. But I love these little moments you encounter in the world. Last night, I went back after the awards. I just won an award, right, and I'm walking out, I accepted it, and it's very honorary - what a great moment! Then I go on and I'm playing as a Dranei character, I'm level 19. I did a series of quests - I didn't know what they were about, I was just going around doing my thing. And then I apparently did something great. I got this big award, I got a tabard I could put on; I'd never worn a tabard before in that game. And then I turn around and I see this line of AIs cheering me. They must've spawned in the world. And I was like, "Thanks guys!" ... My dick got three inches bigger, you know, in a fucking videogame.

I talked yesterday about the three levels of storytelling. The second level, you know, I'm kinda following along, I gotta kill this dwarf maybe - I guess he's evil, I don't know why, he's aligned with the morlocks. ... I love seeing little moments in the world with little details that evoke story rather than tell a story.

TE: If you look at a game like Halo, it's got so much supplemental content. You play the game, then you read the book, and then you do everything else beyond that. Is that a good way to tell a story? To force people beyond the game?

KL: No, I'd like for them to tell that story in the game and let people opt out. ... Those Bungie guys know what the hell they're doing. Their gameplay, their scenario-based combat, their multiplayer, they know what the hell they're doing. But, like, [if you're asking] what would you do if it was your job to make one of these games, I think they have so much great content, but it's sort of set in that parallel structure - cut scene, game, cut scene, game. How do you bring that content into the world? Frankly I wasn't following it all; I tend to skip cut scenes. I wanna know more about the Arbitor, but I wanna see it in the world. The worlds are actually fairly - they have a strong aesthetic vision, but they're kinda nondescript in terms of their function. ... They're sort of abstract in some ways, you know, in the Halo stuff. You're on a spaceship - OK, I can accept that. You don't get a sense of function. In System Shock 2 you really get a sense that you're on a functioning spaceship. Then you start connecting, so I would really focus on bringing that narrative out of cut scenes and into the world. But then, that's not surprising that that's my approach.