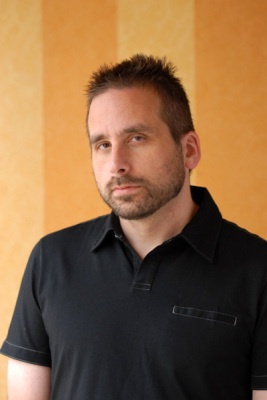 This past Thursday, I had the opportunity to sit down with Ken Levine, creator of System Shock 2, BioShock, Thief and just about every other game you should've played in the past 10 years. He'd finished a talk earlier in the week on storytelling, and was gracious enough to chat about life with Take 2 (he'll never be a joiner), his take on compelling narrative and how World of Warcraft may improve your virility.

The Escapist: BioShock's been out for some time now. It sold great, and everybody loves it. You've received a number of awards for your work. So, where is Ken Levine now?

Ken Levine: It's very gratifying to have the commercial and critical success of BioShock. It validates not only what we want to do in games but what I've been saying about gaming for a while, that it's OK to break the formula a little bit and go in a little different direction both aesthetically, and with gameplay. And that gratifies me, not just with the games I'm making, but for other games. ... I think we're really starting to get to a place where the genre molds are getting a little broken, which is good. It's been an exciting time. I'm just thinking about what we're doing next, what are the next challenges and how do we overcome them.

TE: In BioShock, you revisited a number of themes from System Shock 2. It seems like you enjoy poking holes in popular philosophies. Is that a theme you like to touch upon in your games?

KL: If you look at System Shock 2, if you look at Bioshock, you see similar themes, which are a man caught between very large forces. In Thief it was the Hammers and the Trickster. In System Shock 2, it was SHODAN against the Many, and in BioShock it was Fontaine and Ryan. And these big forces tend to be ideologically opposed to each other.

I've never been a joiner. It's why I'm an entrepreneur. I guess I [joined] with Take 2, but they did give me a lot of money. But I've generally not been a joiner. I think that independent spirit has gotten me into a lot of trouble at times, but it's also what made me want to start a game company. So the games tend to be about that, these people who fall between these very large, powerful forces. I'm not speaking about any individual philosophy out there, more about these large powers with great surety about their purpose, and you being stuck in the middle.

TE: That in itself is philosophical, don't you think?

KL: It's sort of the skeptical philosophy. I'm not really on either side here; I'm sorta stuck in the middle. And I think that's fun because I'm always trapped between these very confident ideologies - you know, the way politicians talk, you have this vision. ... They make great comic books in some ways. The Nazi ideology is the best comic book ideology of all time. People have these certainties. Ayn Rand had a certainty. If you listen to her talk, she talked like Dr. Doom. She had this absolute certainty about how she spoke. Writing Andrew Ryan, reading her was very helpful, because he also has that certainty. And I'm also incredibly attracted to it, while there's some huuuge flaws in objectivism, as an artist, as a businessperson, you know, hey, sign me up. With a lot of philosophies, I think there's that whole level of 'I buy everything about it, hook, line and sinker.' And that's what a lot of philosophies ask you to do is buy everything, or buy nothing. And there's nothing where I'm going to buy everything.