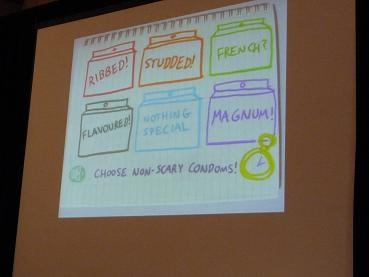 The theme for this year's Game Design Challenge was enough to make a game designer blush: the first time they had sex.

Every year at GDC, the Game Design Challenge tasks a handful of designers with creating a game around a specific concept or object. Past years' challenges include making a licensed game for the poetry of Emily Dickenson, creating a game that used fabric as a controller, or designing a game to be played with an animal. This year, a trio of developers were asked to design a game around their first time in the sack. There were a few rules, of course. There was really only one restriction - the game their game concept had to be playable on existing technology. Keeping their games Wal-Mart friendly wasn't technically part of the rules, but the participants decided to err on the side of good taste, anyway. For the most part, that is.

Portal creator Kim Swift was supposed to be one of the contestants, but pulled out at the last minute (pardon the pun). According to moderator Eric Zimmerman, she was "not permitted" to take part in the challenge because of its sexual theme. Fortunately, Heather Kelley and Erin Robinson stepped in and took her place. The core concept for their game, which never really got a title, began when Erin joked, "Why not just make a mini-game where you count ceiling tiles?" The result is a collection of Wario Ware-esque mini-games that take you through first Heather's and then Erin's first times. Levels include scenarios like picking the least complicated outfit (buckles and snaps are bad), choosing non-scary condoms from the grocery store, avoiding a tumble off the top bunk, and finally calling your best friend afterwards. The object is to fill the Humiliation Meter as much as possible without actually failing to have sex. They only had about 36 hours to develop their concept; their presentation was screen shots Erin whipped up with magic markers, but they had a great sense of humor about all of it.

Next up was Sulka Haro, who opted not to focus on his first time, but rather on yours. His game is more about user-generated content and social interaction than reliving his romantic history. A round of "Your First Time" begins with a player picking a photo that represents a moment from their romantic or sexual history. If you kissed your sweetheart on the steps of your high school, you might pull up a picture of a staircase, for example. You then present your picture to the other players, but don't explain it. They then have to create a story that goes with the picture. When the stories have been shared, the player who chose the picture explains the story behind it. Haro admitted that the tricky part of the game is keeping it clean - he suggested using something like Flickr to keep porn out of it.

Last up was last year's winner, Steve Meretzky who started off his presentation in his usual humorous style, describing some of the various game designs he considered, but ultimately rejected, including Hump, Hump Revolution, Where's Dildo?, and Call of Booty. But when he began to explain he game he eventually created, "Wait, Time Passes," his demeanor changed completely. His game is a journey through three stages of his life- high school, college, and adulthood - takes place in Second Life and is driven by conversation and social interaction. The high school level is "miserable" and impossible to win because you're such a geek that no-one will talk to you. College is slightly better, as you begin to gain a modicum of acceptance from others - you have a chance of getting laid. In the last stage, you have the greatest chance of success, because you've finally become comfortable enough with your own geekitude to be happy. When he began his presentation, he said he hoped it was "from the heart," and he certainly succeeded.

He didn't win, however. After a bit of silly Q&A from the crowd (lots of questions about play testing and tutorials, nyuk, nyuk), the audience voted with applause and Heather and Erin were declared the winners. They envisioned their game as a Wii title, but somehow I'm guessing a collection of minigames involving condoms, walks of shame, and unbuckling pants probably won't wind up on a Nintendo console. Maybe the iPhone, though.

The Other Mrs. Doctor Who Susan Arendt 53 Comments