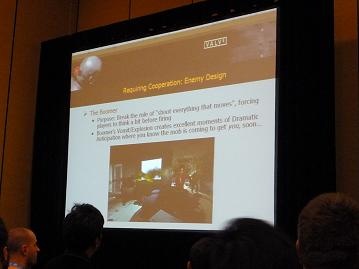 Despite what you may think, Left 4 Dead isn't really about killing zombies.

What it's about, at least according to Valve's Mike Booth, is your teammates. Valve knew from the very beginning that it wanted Left 4 Dead to require cooperation from the players; the tricky part was finding a way to do that without making it blatantly obvious. Valve knew it had to find design solutions that would make players want to do the right thing - stick together and act like a team - without feeling like they were being forced to do the right thing.

The first step was to make players believe that the only way they could win is by helping each other out. Valve always thought of the entire team of Survivors as "the player," and punished non-cooperation very harshly. One of the fastest lessons a Left 4 Dead player learns is that if you leave the group, you die.

To further fuel the desire for cooperation, Left 4 Dead throws an overwhelming number of enemies at you. As soon as you see that first wave of zombies, it's pretty obvious that you simply can't take them all out on your own. Being so vastly outnumbered enforces the desired behavior without being heavy-handed not just because it uses common sense, but also because it taps into what we've learned from watching horror movies. One person cannot stand alone against the zombie horde without facing dire consequences (which usually involve being eaten in some horrible way).

The Special infected were also specifically designed to encourage cooperative play. The Hunter exists to outrun and kill stragglers, another implicit warning to stick with the group. The Smoker pulls apart tightly coordinated teams to create unexpected moments of chaos, forcing players to think on the fly and pay attention to each other. The Boomer breaks the rule of "shoot everything that moves," leading players to think before they fire. Dealing with the Special infected, as well as the Tank and the Witch, encourages team talk and group strategizing.

The Special infected's incapacitating attacks also make players fear being separated from the group, which reinforces team cohesion. Saving teammates from certain death, or even just stepping in with a first aid kit or pain pills, gives players a relatively easy way to feel like the protector/hero. You're also more likely to feel good towards someone who's just saved your neck, and therefore be more willing to rescue or heal him when it's his turn to be dangled off a rooftop.

Not that players necessarily need that much motivation to back each other up. Valve has found that players, for the most part, genuinely like helping each other. Or so Booth says, anyway. I'll have to try and remember that the next time some thirteen year old on Xbox Live tells me to go die in a fire.