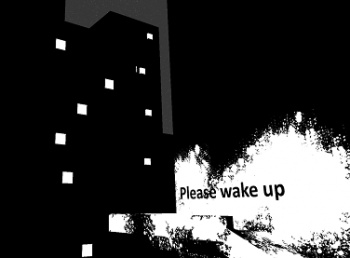 For two hours - which turned into two and a half hours - last Thursday afternoon those of us with horizon-widening in mind stopped off at the Experimental Gameplay Sessions hosted by Jonathan Blow. There we witnessed some pretty exciting (and pretty mind-blowing) things.

Take The Unfinished Swan, for instance. Players begin in a white-out, and only discover the geometry of the surrounding world by hurling balls of paint into the expanse of blinding brightness. Creator Ian Dallas wants to make a game that players can relate to in the same "gentle and easy" way children relate to picture books, and to that end he has implemented some very light narrative and direction in the exploration by providing swan footprints for the player to follow.

Steve Swink and Scott Anderson presented their game Shadow Physics, which sprung from the idea of subordinating other concerns to a piece of tech that is usually subordinated to story and characters: the shadow system. In this game your character is a shadow who exists in the shadow world, but by interacting with the shadows, he can interact with the objects that cast them. Grabbing the star (yes, it bears a bit of resemblance in goals to Crayon Physics Deluxe) in each level is easier said than done: You may have to manipulate multiple light sources to cast the shadows that create the path to it.

Miegakure is a puzzling platformer where the fourth dimension is not time, but sort of a parallel dimension. Marc ten Bosh said he could've just as easily made it five, but four seemed like enough. Unfortunately his presentation seemed to suffer from an error in projection, making the spatial flipping even harder to grasp. The player becomes an adorable little red cube who can run, jump, and change dimensions. By following the way biomes are mapped across spaces, and looking for objects in the fourth dimension that are casting three dimensional shadows, you navigate your way towards the exit of each puzzle. Definitely a trip.

Spy Party creator Chris Hecker is looking for more martinis and less explosions in his spy fare, so he turns to a cocktail party as the setting of his game where one player is an agent and one a sniper outside. Spies take on missions to fulfill, such as transferring a book from one shelf to another (who knows what secrets are contained within?) or bugging the ambassador, all while chatting it up like a pro at a hoppin' social gathering. The animations have very subtle differences that the sniper will have to learn to pick up on. Right now he admits that it mostly relies on looking for these tells, but he hopes that he'll be able to ramp up the complexity as he continues development.

The next presenter was Daniel Benmergui, who brought us the excellent I Wish I Were the Moon, where by grabbing different characters and scenery and shifting them around, you can influence how a simple story plays out. What many of us hadn't realized was that this was only the first game in a trilogy culminating in an even more interesting game - Storyteller - in which there is a beginning, middle, and end of a tale you create in a similar way. You can decide who the hero is, who the villain is, or whether there is even a hero or villain at all. Daniel's latest game, Today I Die, is about a girl committing suicide, but you can save her by discovering new words to the initially depressing poem at the top of the screen.

It was at this point that we had an intermission. It was tempting to head out and see what else GDC had to offer that afternoon, but I'm really glad I stuck around.

Upon our return, That Game Company showed off early prototypes of Flower, which, as you may know, is a beautiful downloadable PS3 game where the player controls the wind to blow petals around. Creating "a safe, free space full of love" was their initial goal, but Jenova Chen quipped, "What the heck is love, anyways?" The visual of a field of flowers did it for them, but they weren't quite sure where to go with it at first. They prototyped just flying through a field, blowing flowers in the breeze, growing flowers, and one where you blow a seed around, which "turned into a golf game..." since you rolled the seed into a hole in the ground once you landed in the right area. Eventually they settled on the "swarm of petals" idea -- "We really like this prototype (because it's like FlOw)," he joked. They considered adding combos and power-ups, but in the end the simplicity of the emotional curve won out.