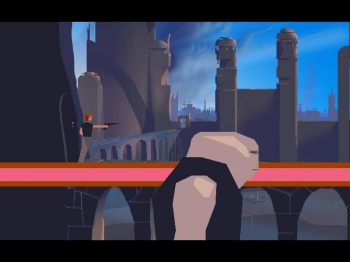 Eric Chahi went into the creation of Out of This World (Another World) with no plan, but a few rules. The result was a masterpiece that's still impressive two decades later.

In the summer of 1989, Chahi was 22 and living in his parents' house. He knew he wanted to make a game, but beyond the basic concept of a scientist being transported to an alien world, he really wasn't sure how he wanted to proceed. He decided to improvise the game's design, making it all up as he went. He recognized that such an approach could be overwhelming, so he borrowed from theater, where improvisation is always constrained by a few simple rules. In Chahi's case, he decided that his game would be 2d, and it would be based on polygons. He was really, really obsessed with polygons. "I was sure that polygons were the greatest thing in the world," he explained to a packed room at GDC. He began to see the world as though it were made of polygons. "I'd wonder, 'How would a potato look in polygons?'"

The problem was that no specific tools for polygons existed. Rather than abandon his primary rule, Chahi created his own polygon editor that was fused to a coding editor - which he also created. The fusion provided impressive flexibility; if he changed the graphics, the code would change automatically in real time, and vice versa. Now that he had a set of tools, and more importantly knew the technical limitations he'd have to work around, he could begin actually working on the game.

Artistically, he was used to working with pixels, so he made itty bitty polygons, which he dubbed "pixigons," to create the game's distinctive and dramatic visuals. The result was stunning, but extremely time consuming to create. To speed up the game's development, he reluctantly used ten bitmap art pieces for the environments.

In January of 1990, he had the introductory movie, which he felt completely justified his obsession with polygons. It also only took up 84k. (Go ahead and ponder that for a moment.) Things were proceeding slowly, but Chahi felt confident that they were moving in the right direction.

Another rule he imposed was that he must always listen to his inner self. He was making the game chronologically, from first level to last level, and taking stock of his emotional reactions along the way. Lester's alien friend wasn't originally going to be a focal point of the game, but at the end of the prison level, Chahi realized how attached he'd grown to the big lug, and correctly assumed the player would, too. "I knew then that Lester would have to find him again," he said.

Chahi explained that the process of developing the game himself created the sense of loneliness that pervades the game. He identified with Lester and his isolation on the alien world - a situation that amusingly led to Lester having red hair. When Lester had dark hair, he reminded Chahi a little too much of himself, which was very disturbing when Lester died.

His improvisational approach led to the creation of an unforgettable game, but a few problems, too. The development took so long that there was very little time to playtest the game before its release - something anyone who played the original Amiga version can definitely confirm. Chahi got the chance to go back and fix things when Interplay ported Out of This World, but he also found himself embroiled in a war of the faxes. Interplay wanted to change the music in the game's opening; Chahi did not. They fought it out via fax until one night when Chahi sent an "infinite fax" - a long piece of paper with the ends taped together that sent a single message over and over and over: "Keep the original intro music." Interplay finally relented, but only after the game's original publisher pointed out that Interplay had no legal justification or grounds for changing the music.

Chahi is surprised and thrilled by his game's longevity, and excitedly announced that it would be coming to the iPad soon. Perhaps it will inspire a new batch of 22 year olds.