I went into my Master of Orion appointment with a healthy bit of skepticism, but left with a follow-up appointment to play more.

I've been cautiously optimistic about Wargaming's reboot of the classic space 4x game, Master of Orion since I first heard it was in the works. I grew up playing Master of Orion and MOO2, even though I only dabbled in the third. As with many of my early-years franchises, I sunk way too many hours into galactic domination, and still retain fond memories of outfitting an armada with Black Hole Generators, and simply obliterating enemy fleets with the greatest forces of the known universe. It might not have been the most efficient approach, but was absolutely the most fantastical I'd experienced at that point in my gaming life. Even though I didn't spot that specific technology, everything I saw and heard about Wargaming's upcoming MOO reboot suggested that this was exactly the kind of lifelong memory the Argentina-based developer, NGD Studios, is expected to create. These aren't just the fan expectations, either. These are full-on corporate dictates from the very top level. Mandates handed down from CEO Victor Kislyi, who wants the Master of Orion reboot to bring these sorts of experiences to the modern age of gaming, so his children can experience the same joy of discovery, exploration, and annihilation that he - and so many of us - did in the 90s.

A brief history lesson: Despite the fact that Civilization pre-dated MOO by a couple of years, the "4x" terminology was coined in an article about the first Master of Orion. "4x" stands for "eXplore, eXpand, eXploit, eXterminate," though I'm unclear why they went with "4x" instead of "4e." In MOO's case, you lead a spacefaring empire in a bid for galactic supremacy. It may not have necessarily been the first in the genre, but it was where the genre got its name. The originals played a huge role in the evolution of 4x games in general. One of the big issues I've encountered with companies trying to further evolve the genre, though, is that they're often just adding layers of complexity, which adds depth, but is also highly detrimental to accessibility. Wargaming and NGD want both with the MOO reboot, so they're keeping the spirit of the original intact in every imaginable way, while offering modern accoutrements to ensure that it's as accessible as possible, without diminishing the depth of the core experience.

Before we get started, though, it's important to note that this was not a traditional press demo. I'm accustomed to getting 15 minutes or so of gameplay, within very specific parameters, while playing through a single mission or quest, all of which is guided by a heavy hand from PR or a developer. My hands on with Master of Orion was so far from the norm, I'm reticent to even call it a demo. It was more or less a chaperoned preview session totaling something like three hours over the course of three days. I wasn't kidding before. I didn't get to see as much as I would have liked in our Saturday appointment, so they invited me back on Sunday. By that point, they had stopped trying to explain things to me, since I was more often than not finishing their explanation of the concept myself from my early MOO memories. After a lengthy session on Sunday, I'd just declared war on the Mrrshan, and a scheduled appointment showed up. They insisted I save my game and come back Monday to see how the war played out. So, no, this was not a regular press demo, and the only reason they seemed to want to have someone in the room with me was to remind me periodically that it was an early build, even if it seemed nearly feature complete and highly polished already. Spoiler: My war with the Mrrshan didn't go well.

I had my pick of five of the 10 races for my game at PAX, but I've always been fond of the science-focused Psilon, so even while the Wargaming team was chatting about the qualities of each race - most of which I easily recalled from my early gaming days - I was examining the new Psilon description and art. I wasn't immediately sold on the creative direction of the Psilon, since I generally don't consider myself a cutesy kind of gamer, but after some time with the race, it really grew on me. Not because I identified as cutesy, but because it occurred to me that even players that knew better would have a hard time justifying a fear of the Psilon race in the diplomacy screen, because they look adorable, and I'm not above using psychology to get a leg up on my competition. 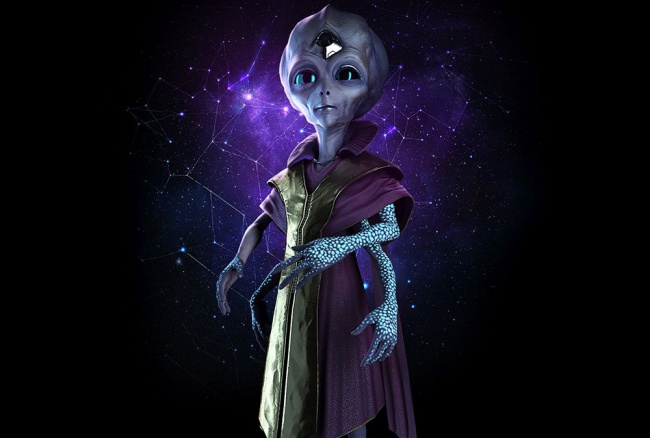 It wasn't just the Psilons that got an overhaul, either. Every race has a beautiful new look to it, which will interest new players, while also offering veterans a more-or-less familiar face during their experience. The game's updates go well beyond the art, with a variety of animations and extensive voice work already being available in the early build. Most 4x games offer an adviser of some sort to act as a sort of tutorial for the early game, and to keep you informed as the game progresses. Master of Orion is bringing adviser animations to these in-game info updates, as well as full voice overs for virtually every box of text I saw. That's not to say that every bit of text in the game will be voiced, but it was prevalent throughout my session. There will be 10 races available at launch, with an additional race being available through the Collector's Edition. Of course, it wouldn't be complete without custom races, which weren't available to me, though I was taunted by the grayed-out button.

After you select your race, you'll be able to enter a "Big Bang Seed," which is what dictates the game map for that match. You'll usually want to use a random seed, but if you find a map layout that's particularly fun to play, you can note the seed used for it, and play it again, or even share the seed with your friends, so they can experience it as well.

I immediately settled a second planet in my home system so I could start ramping up my research and production. The colony management interface is well refined, with very simple click-and-drag interface for most of the systems. Your production queue can hold up to five total projects, including the one currently in production. You can click and drag the icons to rearrange them at will, and projects never lose your progress, so if you need to build an emergency defense fleet in the middle of your building construction, you can just put it on hold until the ships are done and the threat has passed, and then pick it up right where you left off. Your workers are assigned to Food, Research, or Production roles, which you can assign yourself, or allow the AI to handle that for you. The AI option looks great for newer players, who aren't necessarily accustomed to managing a dozen or more colonies at a time, and you can set focuses for individual colonies or your empire as a whole, which will dictate what the AI prioritizes. If you're pushing science hard to get to the next weapon advancement, you can set your whole empire to automatically focus on research until it finishes up.

There's entirely too much to go into detail with every one of the game's systems and mechanics, but a few more items of particular note are worth mentioning. Navigating the galaxy is now primarily done via a series of wormholes which connect systems of planets to one another. You can traverse an occupied wormhole without interacting with an enemy fleet there, but either end of the path can be blockaded by a fleet or a base, to ensure your enemies don't have easy access to your territory. This is going to offer long-term planners a lot of value, but doesn't seem to be a critical system to master, so you'll still be able to have fun, even if you're not one for thinking 20 turns ahead. Finally, there's an "independent colony" system now, which mirrors City States from Civilization, which aren't essential to success, but will play a huge role in the Excellence Victory path, which requires a galactic counsel vote, in which independent colonies have a say, to elevate you to supreme leader.

Master of Orion still doesn't have a release date. In fact, there's not even an announced date for the pre-orders to be available, but given how rich the experience was, I can't imagine it will be too long before we see some motion towards a launch. The Collector's Edition details have been announced, at least, and includes all three of the original Master of Orion games, as well as a unique race, Terran Khanate, retro skins for your nostalgic inclinations, a digital art book, and a digital soundtrack. It also comes with early access to the game, though we have no idea when that might be available, since we don't have a date quite yet for the pre-orders. You can stay up to date on the galactic goings on at the official game site.