I've been eager to see more of Grimm Bros' Dragon Fin Soup since my brief glimpse at PAX 2014, and I was not disappointed this time around.

I got to check out an early version of Grimm Bros' roguelike, turn-based, action RPG, Dragon Fin Soup at PAX Prime 2014, but the studio has been relatively quiet since then. At PAX Prime this year, they had a fairly complete playable build on hand, alongside a promise of a release date announcement in the near future. The target is fall 2015, and I hope we'll have a solid date to plan for shortly.

For the uninitiated, Dragon Fin Soup is a bit of a twisted take on the Red Riding Hood fairy tale, with Red being a badass, drunken bounty hunter, rather than hapless innocent girl. She comes ready to fight with guns, bombs, and, of course, plenty of booze. The drunk mechanic is an interesting implementation of health potion restrictions, which are often simply limited to some number of potions in a specific time frame. Despite Red's affinity for hooch, even she has her limits, so if you quaff too many spirits to keep your health up, her drunk meter will fill up, which triggers a drunken rage. In the rage, you lose control of the character, and she will recklessly throw herself at enemies, regardless of the probability of success. It's an easy way to get yourself killed, but sometimes, you need that health boost, so you'll need to take the risk.

Despite relatively simple gameplay, there is a surprising amount of depth to DFS, with 27 equipment slots, as well as several action bar slots for spells and consumables. You've got a deep crafting progression system, with simple recipes being discoverable by trial and error, and more advanced recipes dropping as loot throughout the game. Recipes have levels, which aren't strict limits, but do impose harsh penalties to your success rate, if your crafting level is too far below your desired recipe level. I didn't get to see any of the craftable gear, but given the apparent depth of the system, I expect it to be a fairly robust means of boosting your survivability. 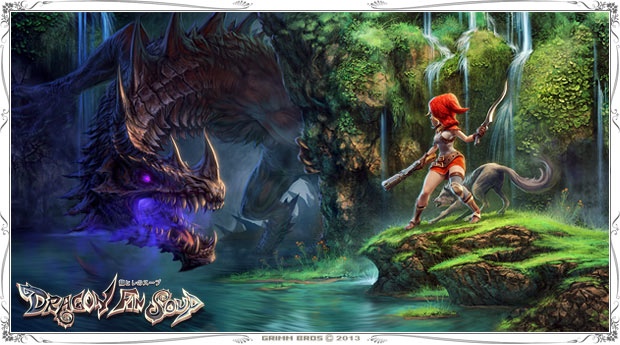 Movement and combat are turn based, so taking a step allows the enemies to take a step - or a stab, as the case may be - making combat a tactical affair, more than a hack-and-slash activity. You'll start off with a few bottles of booze, which serve as your health potions, as well as a shotgun and some bombs to help avoid too many close-combat situations.

My demo was focused on the survival mode, rather than the campaign, so I can't speak to the story much at this point. That said, survival was entertaining enough that I restarted several times during my chat with the team, just to try to get a tiny bit further. Kiting enemies is critical, since most of them don't have ranged attacks, and you start with a not-terribly-effective short-range dagger, which makes going toe-to-toe a dangerous proposition. Dropping a bomb starts a three-turn countdown, ending with a small explosion that does a fair bit of damage. You've got to be careful, though, since you can explode yourself just as easily as an enemy. At one point, I dropped a bomb and got stunned by an enemy in the same turn, which stopped me from getting out of the blast range, and promptly ended my run. You can also kick a bomb after you drop it, to get it in range of an enemy, without having to get up close and personal to drop it. The shotgun is great for area attacks when you can funnel enemies through a chokepoint, since it fires in a cone, and can hit several enemies at once. Loot drops help keep your ammo, booze, and bomb count up, but can also include spells, which you'll be able to equip to your action bar for easy access. You're limited by cooldowns and your mana pool, so you'll want to plan carefully to ensure you have the right spell available in a dire situation.

While the survival mode is definitely a tense affair, I'm most excited to see the story campaign in action. There's just something about a drunken badass Red Riding Hood-esque character that's particularly amusing to me, and I'm eager to see what exactly the highly irreverent team has come up with. Given that there was at least one scene in a rustic strip club, with a pole-dancing skeleton, it stands to reason that there will be a lot to enjoy in the rest of the narrative.

Dragon Fin Soup is aiming for release on PlayStation and Steam this fall, with a final release date coming soon, as well as tablet ports at some point down the line.