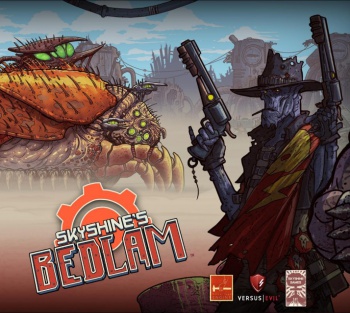 "Surprises are not always good..."

As I stare at the loading screen, waiting for the game to generate my next encounter, I was confronted by these words of wisdom. "No," I say to myself as I think about my empty fuel tank and dwindling supplies even as I prepare for battle. "They aren't." But, surprises can be fantastic as well, and Skyshine's BEDLAM was my first surprise at PAX this year. Finding myself still playing it on the show floor 30 minutes past my appointment, I don't hesitate to say it was a fantastic surprise at that.

It isn't often that you pick up a new game with no expectations and find it to be everything you've been looking for. The first game to be built on the Banner Sage engine (outside of the Banner Saga franchise, of course), Skyshine's BEDLAM is part FTL, part Oregon Trail, with a dash of XCOM and Banner Saga to boot. Sprinkle that over a storyline and world reminiscent of Mad Max, and you have a recipe for a ridiculously fun and new experience that is refreshing and exciting.

A Kickstarter success story, Skyshine Games raised $166,540, surpassing their goal as gamers breathed life into their idea. And what was born is a rogue-like, turn-based strategy game with RPG elements, all set in a post-apocalyptic wasteland. It is this unknown wasteland that you are trying to traverse with 1000 other souls along for the ride. You play "the Mechanic," a mysterious figure from a once-great society which now exists only in the memory of the people who discovered you. Telling them of forgotten futuristic haven named Aztec City, you embark in your fortressed vehicle with all the crew, food and fuel you can carry and attempt to traverse the unknown, apocalyptic world in search of it. Will you make it? The answer is not quite as simple as fording the river. 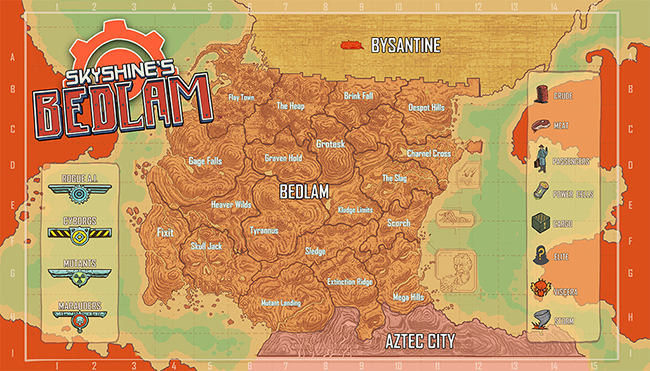 Working your way through the randomly generated world is far from easy. With no game saves and unknown, random encounters and battles, you only have one crew and one shot at making it. If that doesn't sound challenging enough, you must do all this while keeping an eye on your supplies to ensure you don't meet certain death at your own hands. Make it to Aztec City and you'll be rewarded with a permanent buff which carries into your future gameplays.

One of the most frequent encounter types is battles against the game's five different playable factions, all of which play differently and bring unique gameplay and strategy consideration to the table. A limited number of your 1000 crewmates have combat training and it is from them that you will pick between four classes to assemble your team. The combination of classes you bring is wholly up to you, as you won't find an indispensable healer or required group make-up to succeed. And since you don't know how many enemies there are or what the battle composition looks like before you begin, you can't min/max your group for the encounter even if you wanted to. Play exactly how I want? Yes, please. All of the yes.

The only question you need to ask yourself before deploying is "Do I feel lucky? Well, do ya punk?" Why? Because the less people you bring, the more supplies you'll receive as rewards if you win. But you still have to win first.

Battle may remind you of the Banner Saga and XCOM, but Skyshine manages to present a wholly unique experience. You'll find that they take on a much more rapid pace than most turn-based combat systems and there is no initiative or turn-order. You get two turns each round, which you get to use however you want across your units to either move or attack. Want to attack move the same unit twice in a row? Go for it, but I hope you're in cover. You'll quickly discover that everyone is relatively fragile, especially at first. And while your opponent gets two turns as well initially, take too long to take them out, and your enemy will start to accrue more turns than you, quickly erasing any upper-hand you managed to achieve.

The Skyshine developers will compare combat to chess and after getting a few battles of my own under my belt, that comparison is not far off. Every move and placement you make is wrought with tension. There is no playing it safe in the wasteland and you'll find yourself making sacrifices for the end goal, attempting to manipulate the enemy into vulnerability so you can close in for the kill.

BEDLAM looks and feels great too. It not only has compelling and smart gameplay and encounters, but it has a world that actually lives. The art is beautiful and unique, making it one of the best looking games I've played at PAX, drawing you in. And resource management and combat losses mean more when each unit has a unique backstory and name of your choosing. Overall, Skyshine's BEDLAM offers players a lot, all wrapped up in a unique with almost a little something for everyone. It should definitely be on your list as a game to look out for when it releases for PCs this Fall on September 17th, 2015.