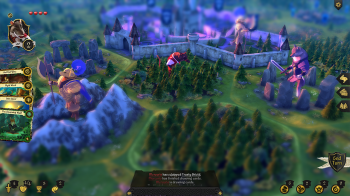 In Armello, clans of adorable woodland creatures are plotting to take out the Mad King.

League of Geeks' upcoming title Armello is a digital four player board game that takes players to a magical world that has been cloaked in darkness. There are four heroes, each of which has a unique set of strengths and weaknesses, with the option of playing aggressively or stealthily. There is questing, scheming, exploring, and vanquishing, as you plot against the King, fight off the King's royal guards, and battle against other players with the ultimate goal of becoming either King or Queen of Armello.

"It's like Game of Thrones, only everyone is a fluffy animal," League of Geeks founder and director Trent Kusters told me.

In Armello, each player assumes the role of a hero from one of four separate clans - Rat, Rabbit, Bear, or Wolf - in the midst of a power struggle against the insane lion king who is being corrupted by a mysterious dark force. When beginning a game, the player has the opportunity to explore, lay traps for other opponents, attempt quests, or seek out combat. Each player begins at the corner of a board made up of randomly distributed hexagonal tiles, moving and completing quests in order to increase their skills and earn abilities in anticipation of their eventual battle against the king. Combat utilizes dice and over 100 fully animated cards that a player can use to sabotage other players.

Armello stays true to the integral features of board games, while introducing new characteristics that aren't entirely possible in a tabletop setting. For example, Zosha from the Rat Clan goes into full stealth mode every sunset, staying hidden from sight through the duration of the evening. This allows her the opportunity to outmaneuver aggressive heroes while sneaking up on more vulnerable ones. Barnaby from the Rabbit Clan is a more offensive fighter. As a skilled tinkerer, he is able to swap items in and out of his inventory depending on what any given situation calls for, making him highly adaptable to multiple strategies.

"Playing a game knowing that Zosha could be lurking on any tile at night or Barnaby is likely to have the perfect tool for every situation, are game changers," Kusters said. "It's another way we're delivering on the simple depth all great board tabletop experiences possess."

There's also a day/night cycle in Armello, and because of the fairy-tale setting things become more dangerous at night. There's an incredible attention to detail evidenced by this cycle, with the birds changing, monsters becoming more powerful, and of course, some characters becoming completely invisible. Some characters thrive in the daytime, while others need night in order to advance meaningfully.

Just as there are different ways to play Armello, there are also different ways to win. You can kill the King, or you could collect what is called "Prestige." The person with the highest Prestige ranking has direct influence over the King's laws and decisions, as well as access to the King's army. If someone dies trying to kill the King, the player with the highest Prestige ranking becomes next in line. This person actually wants to keep the King alive, in order to use their influence over him to take out other players.

The full version of League of Geeks' Armello includes eight unique characters and releases on September 1, but the early access version of the game on Steam has already garnered 93% positive reviews.