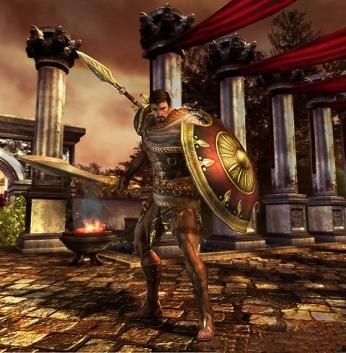 PAX '08: Rise of the Argonauts Hands-On

Ancient Greece is in.

Well, okay. That's not being entirely fair to the title - from what game designer Andrew Rubino showed me, their Action RPG has quite a bit of, well, RPG under the hood, and the peek at the game's advancement system definitely had me nodding in appreciation for Argonauts' potential in that realm. Even so, that's the sort of thing that one can't really get a feel for in a limited hands-on scenario. What I did get a chance to try out on the PAX '08 show floor was the "action" part, and Argonauts doesn't disappoint.

Let's get the obvious comparison out of the way first: Argonauts isn't God of War, and I don't think it's trying to be. Both games feature blood-pumping action set in heavily stylized versions of mythological ancient Greece with a healthy appreciation for gore - and that's pretty much their common ground. God of War takes "over the top" to an entirely new level, relishing in its "heavy-metal" fantastic setting as Kratos bloodily tears harpies in half. Argonauts has its feet more solidly (though by no means completely) in reality, aiming instead for a slower, more methodic feel. Naturally, when compared to the whirlwind frenzy of God of War, "slower" is a relative term - Argonauts' action is anything but plodding.

Where Kratos hacked and slashed with two magical blades embedded into his arms with chains, Jason (of "and the Argonauts" fame) is content with slightly more mundane weaponry: over the course of the first level, I acquired a sword, a spear, and a mace. While Jason can acquire different specific swords, spears, and maces along the way in his quest for the Golden Fleece, he'll always have the three types of weapons at his disposal to switch between as the player sees fit. Swords are quicker, maces pack a stronger punch and more easily crush through enemies' shields but swing more slowly, and spears have a longer range. The player can cycle through the three weapons at the touch of a button, and can even do so mid-combo - for example, stunning an enemy with a quick sword strike and then grabbing the mace for a devastating and lethal final blow.

Jason also carries a shield around with him at all times no matter what weapon he's using, a welcome defensive tool when set upon by enemies out for your blood. The shield can also be used to bash enemies, either to give yourself some breathing room or to open them up for a followup attack. I found that using the shield came very intuitively, and gave me space to plan out my options more tactically while not taking me out of the sense of combat.

Combat in Argonauts is very quick, with many enemies dying in a few hits: Rubino explained to me that the developers wanted fighting to have a more cinematic feel, where having a sword slice through somebody would and should kill them. Basic attacks are generally used to knock enemies off guard or break down their shields and armor - once they're reeling, a simple tap of a button will deliver the coup de grace. These finishing moves are mainly cosmetic, but that doesn't make it any less satisfying to watch an enemy's head practically explode beneath a swing from Jason's mace. Rubino's personal favorite soon became mine - Jason skewers a foe with his spear and then swings his shield, decapitating the unlucky enemy with its edge. The attack actually exists in the game as more than just an animation, and any foes standing too close to the recently departed will have their own lives at stake.

As the game progresses, Jason will be able to add famous Argonauts to his crew, some of which can be selected to follow him into battle under the control of the AI - familiar names like Achilles and Hercules, among others. In the first level, though, your only companion is Herc (and he ends up getting separated from you early on), so I didn't really get a feel for how much they'll contribute to the fight later on.

While I didn't get a chance to go really in-depth with the RPG aspects and the advancement system, I did like the bit I saw. Jason can earn the favor of any of four Olympic Gods - Athena, Ares, Apollo, and Hermes - depending on his actions during battle and the choices he makes to deal with people outside of battle. Ares, for instance, rewards reckless offensive behavior in a fight, going after one's enemies with little concern for one's own welfare. Hermes favors a more nimble and agile style of play, avoiding hits rather than taking (or blocking) them. Apollo rewards defensive players, and Athena prefers tactical ones who use the spear to interrupt and counterattack.

The bonuses and abilities they award further bolster those aspects, so players can more easily choose their preferred style of play. It's a clever system that I'm looking forward to experimenting with in-depth once the game comes out.

Obviously, Argonauts is a game under construction, still in need of polish and working out the kinks ... but for me, it was easily one of my favorite titles on the show floor at PAX '08. Jason and the Argonauts continue to prove that yes, the ancient Greeks simply kicked ass.