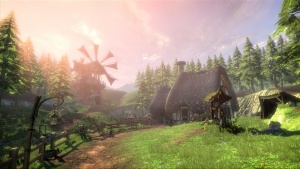 On the other hand, sometimes you go in expecting a bit more than the game delivers. That doesn't mean that the game in question is necessarily bad, per se ... but that it just doesn't live up to what you hoped it would. These five games didn't live up to the expectations I'd gone onto the PAX show floor with.

It's not that I disliked the demo they had on the show floor (though it had its issues), but my disappointment in Fable 2 stems entirely from what Lionhead chose to show us. It was the same build from this year's E3, featuring a short combat segment with the player character and their (player-controlled) henchman. The combat in Fable was okay, but not a selling point; the character customization was what sold the game for many. I understand that it was a demo with a limited amount of time, but I still can't help but be bummed that I didn't get a chance to play around with different hairstyles, tattoos, etc (or even sneak a peek at the advancement system and available upgrades). What we saw was a glorified hack-and-slash that didn't have any of what I loved about the original Fable. That's not to say it won't be there in the final game, but it wasn't there at PAX.

On the one hand, I can't help but feel like I'm criticizing the game unfairly because the kiosk I was playing it on was bugged, and abilities weren't being properly mapped to the 360 controller. I'm sure that if I got a chance to try it out again with a full repertoire of superhero-y moves at my disposal, it'd feel a lot more solid. That said, the game itself wasn't quite what I'd been expecting. I appreciate the comic-book feel that Cryptic is trying to emulate with the cel-shading, but the graphics do need a lot of polish. This is a game that I was hoping would be a clear cut above 2004's City of Heroes when it comes to visuals, and that simply wasn't the case.

The combat was repetitive (though again, having a limited number of moves at my fingertips certainly didn't help), and even some of the cooler ideas felt clunky in the way they were implemented. I liked the idea of being able to pick up an object (say, a barrel) and hurl it at an enemy for an almost-instant KO, for instance, but there was an uncomfortable delay between when I pressed the button to pick it up and when my character actually hefted the barrel onto his shoulders.

The game isn't set to release for a while, though, and many of these issues are ones that are certainly fixable before launch. Champions has some solid ideas (and I'm still loving the whole "create your own super-villain nemesis" aspect, to be sure), though it needs polish and fine-tuning - I'm not about to write this one off just yet.