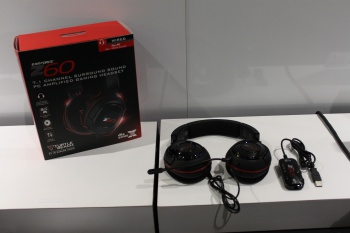 If you're using a 5.1 or 7.1 surround sound headset with your PC or console, chances are it has some sort of Dolby certification. The Dolby stamp of approval/money means your headset, in most scenarios, isn't going to totally suck.

But what about DTS in a headset?

DTS is a group and tech brand typically associated with theater experiences. Most movies rock DTS-HD Master Audio, and that A/V receiver you just dropped $300 or more on supports the same standard. Now that kind of certification is coming to a PC gaming headset.

The Z60 is a USB virtual surround sound setup, with a 60mm driver in each ear. Sound processing is handled by a small USB sound card, which takes advantage of the Z60's larger "soundstage."

In all seriousness, Dolby and DTS in gaming are going to give you roughly the same experience, but Turtle Beach says the latter gives them more freedom when it comes to audio height adjustment. By their logic, the center channel in a headset usually puts front audio way too far in front of you -- your own footsteps sound like they're eight feet in front of you instead of below you, for example. DTS and its audio height adjustments means that virtual center speaker is closer to your feet or midsection, and tilted up towards your face. Your footsteps come from beneath you now, making for a more realistic simulation.

But since I didn't go ears-on with the Z60, it's impossible to tell if this is all going to be true -- call it theoretical for now. The Z60 will be under $150, and launch this Summer, and The Escapist will be reviewing the headset ahead of its release.


Additionally, TB has a PS4 Headset Upgrade Kit in the works. Because the PS4 lacks analog audio inputs, audio is handled by HDMI, or by digital optical cabling. This means the expensive analog headset you liked to use with your PS3 is obsolete before you even buy a new console. The DAC1, as it's being called, attaches to your analog headset of choice, and converts the analog connectors to digital optical audio. Not bad for a small USB dongle, right? Pricing and availability is TBA.