Tabletop at PAX is unique because it's equal ground. The biggest publishers share space with the smallest because, simply put, the average PAX-goer doesn't know a thing about tabletop games. All they know is that they enjoy playing tabletop games of all kinds and they've got money burning a hole in their pocket. In that light, it's interesting to see who thrives - the old guard, with games that have brand recognition but little glitz and flash, or the new and indie showings, with kickstarter dollars to burn on marketing for the first time ever. One thing's for sure: PAX has brought more people into tabletop games than any American convention before it, and that's a good thing.

If you're looking for one thing, or want to skip ahead, here's the sections:

The Lay of the Land 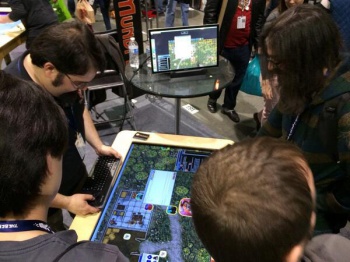 As always at these kinds of events, there was a fantastic array of very expensive game toys on display, but two stood out. The first were the omnipresent Geek Chic gaming tables with a large amount of 3D terrain, including custom sculpted Dwarven Forge stuff from its last kickstarter. The second and decidedly more drool-inducing was a multitouch digital gaming surface from Mesa Mundi combined with the software in development at D20 Pro for playing games like Dungeons & Dragons or Pathfinder online. The huge, multitouch table combined with the GM's side of the software on a nearby laptop delivered the kind of experience promised by old Microsoft surface demos from years back. A quick demo that the guys at the booth ran showed how rapidly the touch software allows players to take an action, attack an enemy, or use a spell, and how the GM can reactively reveal portions of a map, and tweak game statistics behind the scenes. While things like this are definitely still the purview of wealthy specialists, there was definitely a certain magic to the glow of the touch display and the speed with which it reacted - is it the future of complex, mathematical tabletop roleplaying games? No way to forecast the future, but what I can tell you is that it's a really fun toy to play with.

Popular publisher iello made its first appearance at a PAX East this year, laying out a healthy size booth filled with copies of King of Tokyo and Tokaido. It also brought a giant copy of King of Tokyo, including characters the size of a person and dice so large you could barely hold all of them at once. The most notable thing going on for iello was a copy of La Nuit Du Grand Poulpe on display at its booth. La Nuit, due for English translation and publication this year, is a bluffing game with light mechanics that looks quite fun. While I couldn't get the entire sense of how the game played from a short demo, the mechanics seemed like they had enough bounce to carry fun player interaction and the dark, carivalesque art was quite nice.

Mayfair Games had a strong showing at PAX too, delivering the widest variety of new games from their lineup for the coming year. Cat On A Hot Tin Roof was an easy standout, a game where you're a cat trying to collect as much delicious fish as you can by building paths between neighborhood rooftops - it looks like a surprisingly tactical game for such a light theme! Also on display was Villainy!, which, while I didn't get to play it, was described to me as Doctor Horrible meets Mayfair Games. Color me intrigued. There were certainly more varieties of Catan than you could shake a stick at on display at the Mayfair booth, with near-constant games going on rotation for all three days of the convention. The booth staff even had a bit of a knowing nod to the proliferation of the Catan franchise, with each wearing a different Catan-spinoff shirt every day.